The start to the damselfly and dragonfly season for me was a little slow. Six visits to four favoured locations between 24th April and 9th May yielded absolutely nothing in the way of Odonata. We then had an unseasonably extremely cold wet spell which further delayed emergence, and this was the situation until we departed for our visit to the Outer Hebrides. On our return I was, therefore, disappointed (and, at the same time, excited!) to find two damselfly exuviae in our mini-pond which was only set up last year. I have yet to attempt to ID these exuviae, and two others (the emergence of which I subsequntly missed!) due to too much to do to catch up after our return.

I'm pleased to say, however, that I did find time to get out for several short visits in order to check on the local Odonata situation, and with some success, although the photography side of things was far from satisfactory, due to the focus function of my camera set-up not working properly. I have two identical camera bodies, the first of which developed a problem early on in the Covid pandemic, which gave me issues with having it serviced. Now that the second one is misbehaving, I'm going to have to bite the bullet and get something done about it !

So here is a brief account of those visits:-

It being the spring bank holiday, I felt it necessary to visit somewhere where there was a good chance that there would not be too many people around. Saltersford Valley CP was closed to the public (and still was at last count), but I have permission to visit in order to survey for Odonata.

By far the most numerous species found was Azure Damselfly, which I did not specifically count but conservatively estimated at 21-100 specimens (a bracket that is in accordance with County Recorder instructions), with four pairs being counted.

There were also good numbers of Blue-tailed Damselfly, which I recorded as '6-20'. The females of this species come in five different colour forms. This first one is of f. violacea, which will mature to f. typica or f. infuscans.
I noted five Large Red Damselfly, including one pair in tandem. 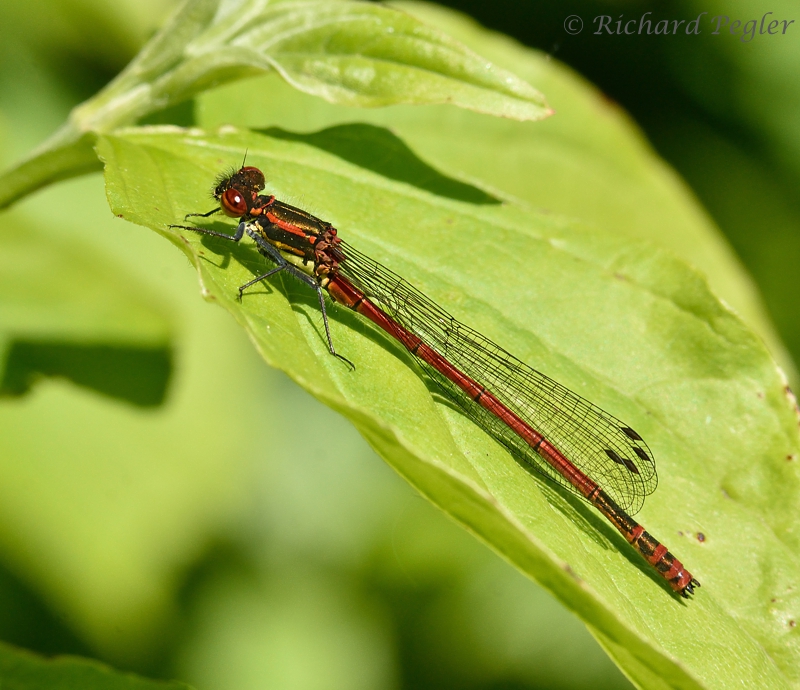 Incidentals to the visit

A Great Crested Grebe was near the nest (now empty) that featured in my previous blog post, but unfortunately directly into the light so its full glory was not captured.

I tried to capture the essence of a lengthy spat between a pair of Mute Swans, but failed. I'm not sure what was going on, but one was pursuing the other for a good five minutes or more!The Yellow Iris plants were flowering quite profusely and I couldn't resist a photo of one.I had seen good numbers of damselfly but, sadly, no dragonflies.

The next day, I headed off to another nearby favourite site - Heather Lake. Here I found a somewhat different situation, with the area being dominated by Common Blue Damselfly. These were impossible to count but I logged numbers as '101-500' including '6-20' pairs, although I suspect that numbers probably exceeded both these brackets.

The only other Odonata species seen, but not photographed, was Large Red Damselfly, of which I saw two males.

Incidental to the visit

There was much white 'fluff' around and this turned out to be debris from the seed heads of a tree. Trees is a subject I know virtually nothing about so I cannot comment on the ID of this one. With thanks to 'Conehead54', I now believe that these are the seadheads of a Salix sp.

The new area of Sence Valley Forest Park contains a number of fenced-off newly planted areas, one of which I have kindly been offered access to by Forestry England in order to record the Odonata in the newly created ponds it contains.

I had a short visit there on this day, but it turned out to be a rewarding one, giving me my first dragonfly sightings of the year.

Immediately apparent were two male Broad-bodied Chasers which seemed to be having a squabble over territorial rights. During my visit, I noted five of this species, including two females ovipositing directly into the water as is normal for this species. However, my camera problems wouldn't let me record this. One of the males was just heading into maturity. 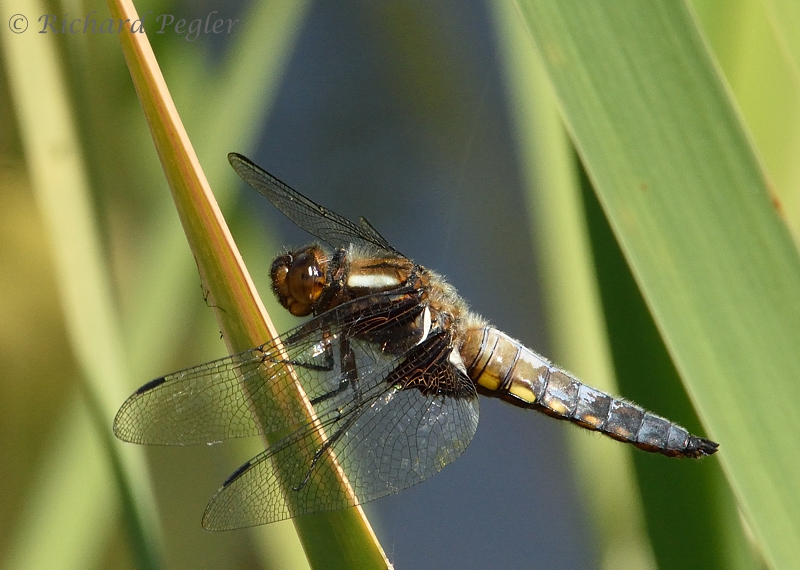 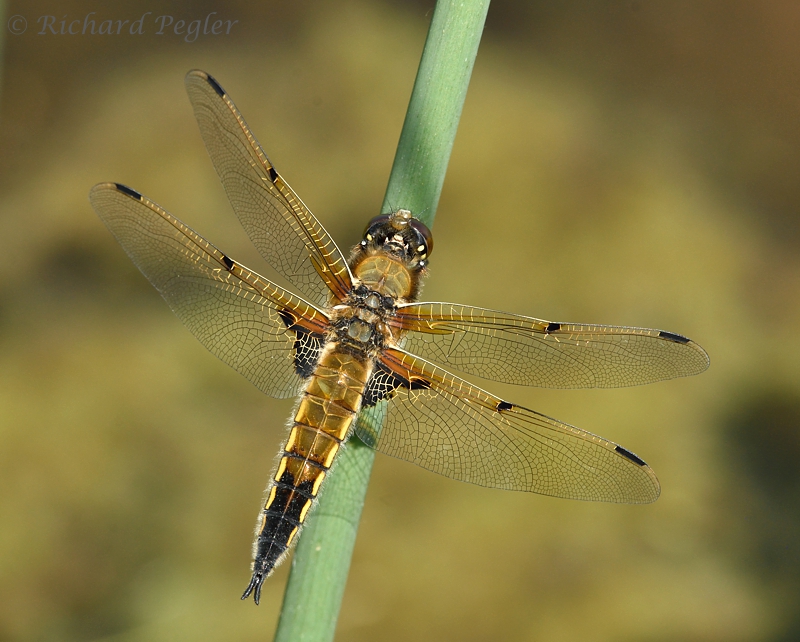 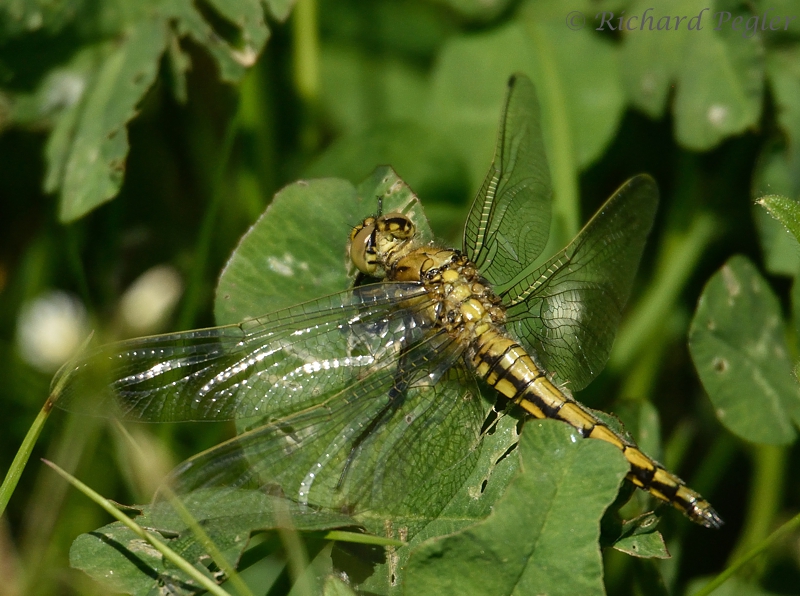 I was paying most attention to the dragonflies, but damselflies were numerous with by far the majority present being Common Blue Damselfly. I recorded numbers being '21-100'.There were also Blue-tailed Damselflies present, with numbers recorded as being '6-20' including yet another female of the form violacea.Only two Large Red Damselfly were recorded.Outside the fenced-off area, at the close-by River Sence, I found three Banded Demoiselle - all male.

If you needed any proof that I am only an enthusiast rather than an expert, I offer the next image of a teneral damselfly which I am unable to ID. I can't match the apparently dark segments 8 and 9 with a species. Help please!!!Incidentals to the visit

There were disappointingly few butterflies around, but I was pleased to sea a Common Blue.

In the past, when I have found Red-and-black Froghopper there have been several of them in the same area. This one seemed to be solitary.There's a group of spider species that seem to favour ponds and like to rest with their heads down and their legs exteneded in front of them. They always seem to look rather sinister to me.This last shot is of what I think is a group of spider ladybird eggs on a fence post, but I am far from sure. Your comments and suggestions will be welcomed. My thanks to 'Conehead54' for pointing me towards the ID here.
I have, two days ago, been gifted a voice recorder which I can clip to my binocular/camera harness and which I hope will make future recording of my sightings easier and more accurate. Until now it has been a case of having to pull a notebook and pen out of my pocket and write it all down.

This brings me to the end of this post. I shall now start working on a post to cover the first part of our May visit to the Outer Hebrides - it may take some time!

Thank you for dropping by. Take great care - - - Richard