It has been a long while since my last blog post, due to a number of reasons, not least of which was Lindsay and I being away for the second half of May during which time I shot more than five thousand frames with my camera. I am still in the process of working my way through them all and have still got a way to go, so here is a relatively brief blog post - images, but few words - just to keep the ball rolling until I come up with the first part of my blog post on our Outer Hebrides visit.

It had been a relatively unproductive start to the week and, the weather having recently turned somewhat warmer with some sunshine, I decided on a visit to Saltersford Valley this day in the hope of finding my first damselflies and dragonflies of the season. In the event, I was too early and the visit was none too successful. The Reed Buntings were busy, however.

On the far side of my circuit of the site I noted a Great Crested Grebe sitting on a nest.As I calmly walked by on the path, the bird (presumed female) got up and swam away. I grabbed a distant shot of the nest and eggs and beat a hasty retreat up the hill away from the lake.I saw little else during my brief visit, but did take photos of a couple of wildflowers - I have no idea of the ID of the first one! This has now been identified as Meadow Cress (known in the parts as Cuckoo Flower) - thank you, Diane!
That afternoon, a male Bullfinch graced our garden.Saturday, 8th May          Garden

The Mallards were still visiting, and continued to do so for a while although it is now around four days since one (the female) was last seen.

I made another attempt at finding damsels and dragons, this time at Heather Lake, and yet again I failed. I had to point the camera at something, and this Coot turned out to be that 'something'!

That night, the moth trap went out and scored a meagre six moths of six different species. These two were the most interesting from my point of view.
Monday, 10th May          Garden

We occasionally see Holly Blue butterflies in our garden but, now the ivy has gone, they do not often stop. This one decided to oblige, however.

The Common Green Shieldbug is, as the name suggests, the most common of the shieldbugs in these parts. This one decided to land on a conservatory window and, having taken a shot from outside, I took another of its underside from inside. 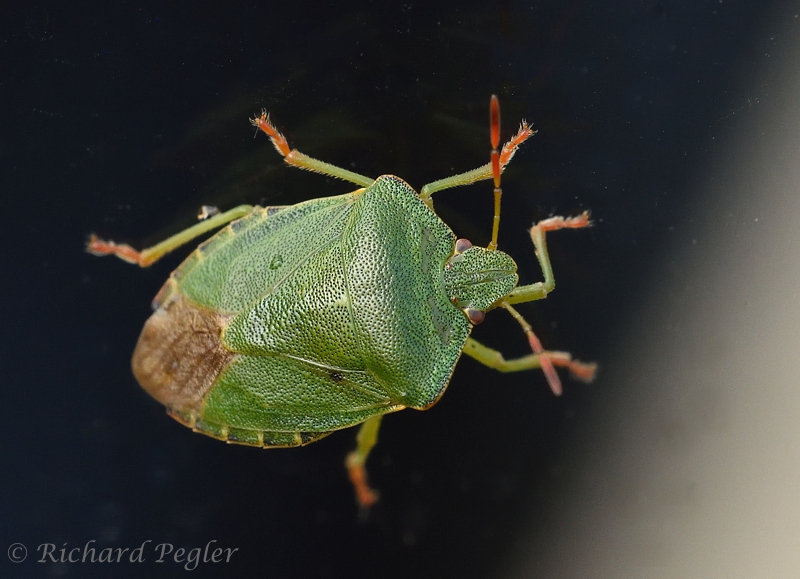 Mr Bullfinch did me the favour of posing outside my study window that day, too.

The Garlic Mustard plants in the garden, once considered by me to be an unwelcome weed, have been left to grow for the past couple of years, as they are favoured by Orange-tip butterflies. Last year we had a few Orange-tip caterpillars on the plants, but these seemed to get predated by the birds in our garden, with House Sparrows and Blue Tits being the main suspects. This year we have somewhat more Garlic Mustard, and have had more sightings of Orange-tips. Here's a female:- 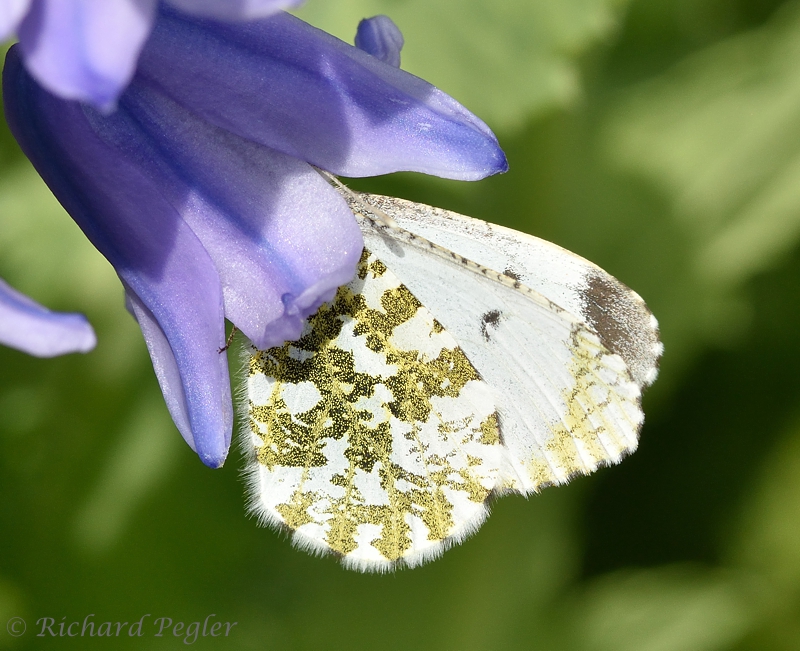 Since returning from the Outer Hebrides, I have noticed that we have Orange-tip caterpillars (some absolutely minute) on the Garlic Mustard, and I am keeping a close eye on them!

I also photographed a day-flying moth - a Cinnabar - in the garden that day.

On this day I managed some shots of a male Orange-tip, demonstrating the origin of the common name for this species.

I also photographed this 'fly' that day. Initially I thought it might be a male St Mark's Fly but now I'm far from sure.The rest of the week was unproductive as I was clearing the decks prior to our departure to the islands.

This brings me to the end of this blog post. Blogger has been playing silly devils with the font size, seemingly randomly changing it, and then when I call for a larger size making it even smaller! This has meant that I have to request a size even bigger still, and now I'm ending up with font sizes that are all over the place - sorry!

Oh, and now, it seems, it won't let me change my header image!

I'll now be returning to photo processing the rest of the Outer Hebrides material, after which I will be working on the material captured after my return, including, I'm delighted to report, a few damsels and dragons. I'm not sure what will appear on my blog next!

In the meantime, take great care and stay safe - - - - Richard