Herewith the second part of my account of our family holiday in the Isles of Scilly. You can find Pt.1 here:- http://peglerbirding.blogspot.com/2021/10/scilly-sojourn-septemberoctober-2021-pt1.html.

frequent showers and windy virtually all day until evening, then still and dry

The forecast for the morning was wet and windy, with it starting to get drier after mid day. This left me in a bit of a quandary as to what to do for the day. At all times, there would have to be at least one of us in the property, as Georgie had yet to find the ability to step outside, and getting her to ride in the buggy appeared to be out of the question.

Melanie and Lindsay popped out to do a little shopping after breakfast, after which Melanie and I went off for a ride in the buggy so that I could show her parts of the island that she had not yet seen. We got out for a short walk to visit Giant's Tomb, a large ancient burial chamber, on Porthhellick Down. To give some idea of size of the burial chamber, Melanie's head is just about visible above the rear of the edifice. 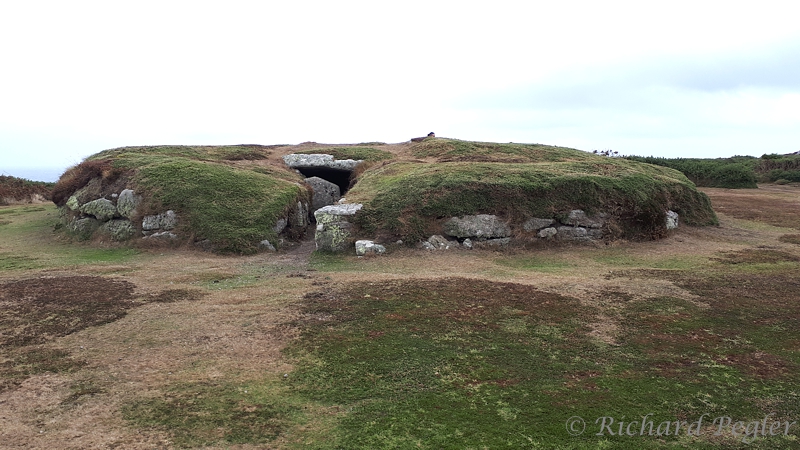 On our return, Lindsay and Melanie took the buggy out again, while I stayed in to look after Georgie, who was still asleep in bed (as mentioned in my previous post, she is nocturnal), and had my lunch. This left me free to take the buggy out when the girls returned. I went back to the north of the island, getting soaked in the process, and parked at Trenoweth to walk to Helvear to have another go at getting some shots of the Balearic Woodchat Shrike ( which was now being referred as the 'Balchat').
I'd been in the area for about quarter of an hour and not found it when I met another birder who kindly took me further up the hill to a place where it could be seen from. I subsequently found a slight better place to view it from but it was still at quite a distance. This shot was taken when the rain eased off a bit.
I stayed there for an hour and a half, in the hope that it would come a little nearer, but was now wet through and rather cold, so I gave up and set off back towards base, stopping for a while at Porthloo where there was a group of Sanderling and another of Oystercatcher. I found that, if I stood still, the Sanderling would come very close and not be at all nervous about my presence - unlike the Oystercatchers, which gave me a wide berth! 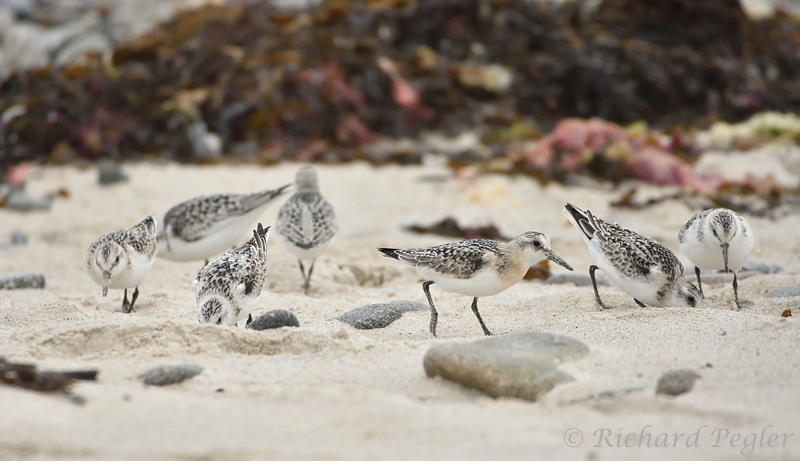 Having arrived back at base to dry out, the girls decided to walk to the beach and, to our delight, Georgie decided that she wanted to go too. Then something really wonderful happened - Melanie and Georgie were outside before Lindsay, and Melanie managed to persuade Georgie to try a short ride in the buggy with her. The result was that, when they came back, all three of them went off in the buggy to what they refer to as Treasure Beach and had a wonderful time collecting sea glass.
That evening the wind dropped and the weather brightened, and after taking a few photos from the garden I  went for a short walk up through the Sally Port onto The Garrison and round to the harbour, where a Shag was on one of the floating pontoons.
Thus ended a rather wet, but enjoyable day, with the birding highlight being getting a better shot in the bag of the shrike .
Friday, 1st October          Porthcressa - Helvear - Porthhellick - Lower Moors - Hugh Town beach - Porthcressa
sunny for most of the day, apart from a rainy spell early afternoon
We got off to a bad start as the internet on the islands went down at 01h00, and was forecast not to be reinstated until Monday 4th - the day we were scheduled to depart. This would probably be a major disaster for Georgie.
This turned out to be a better weather day, and the most rewarding in terms of bird sightings. However, it started a little grey.
Early in the day, there were two seals  way out in the bay, keeping each other company.
I had to go to Becky's Cake Shop to pick up a cake that we had ordered for a planned early celebration of Melanie's birthday. I came back to find that Lindsay was not well and in touch with the doctor at home to arrange the necessary medication, which I then had to go and pick up from the hospital.
My next job was to rush Georgie and Melanie to the quayside so that they could get an out and back boat trip to the 'off island' of Tresco - yet more progress!
Lindsay encouraged me to go out on my own, taking the buggy, so I set off back to Helvear to see if I could get better shots of the Balearic Woodchat Shrike. I arrived to find a couple trying to find it, and am pleased to say that I was able to point it out to them immediately! Having seen it at a distance, they soon departed, and the bird then came much nearer than it had on my previous two visits, allowing better photography. I'll never see this species again, so here I go with a group of photos! 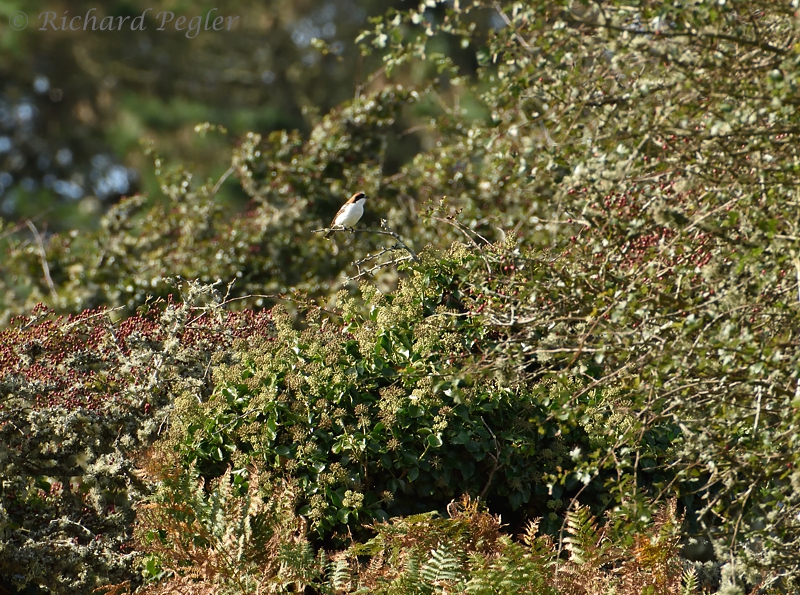 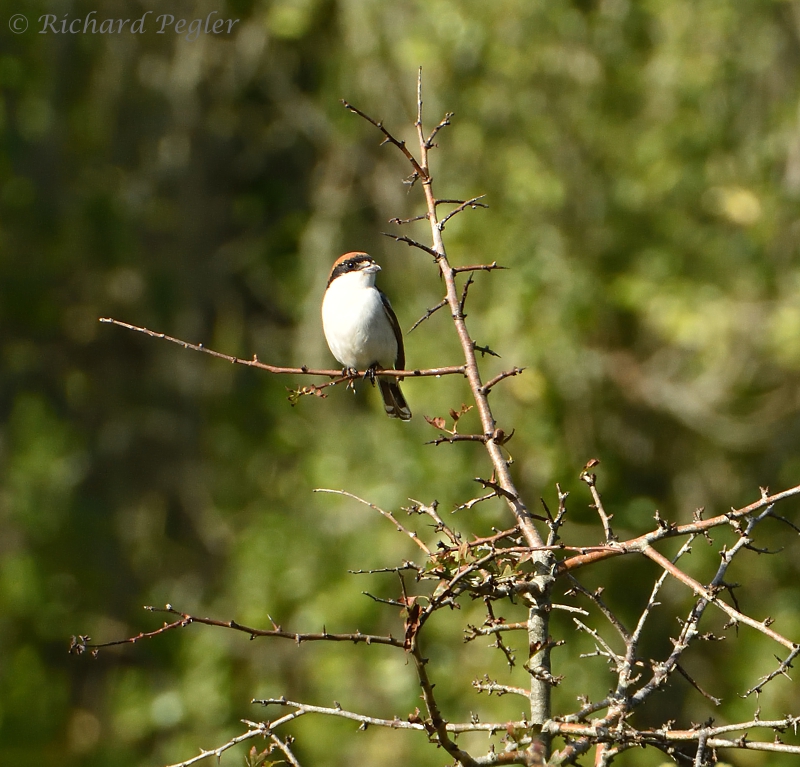 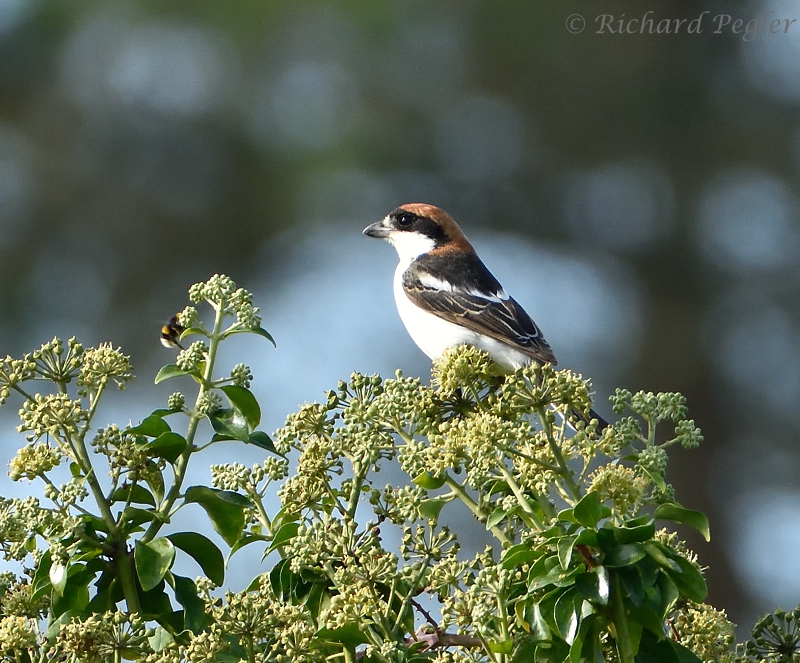 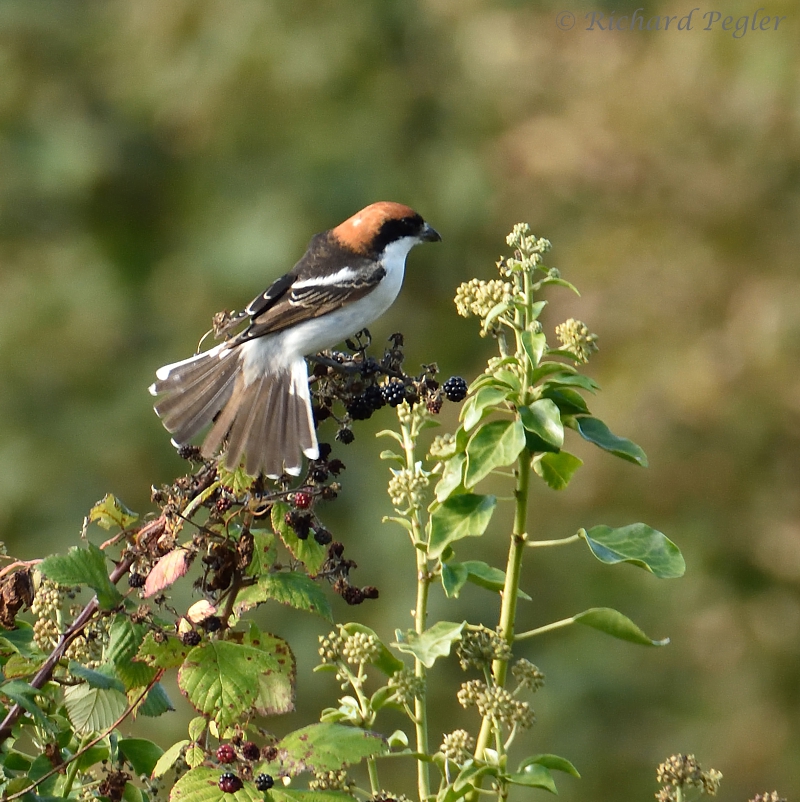 Having had my fill, I set off for Porthellick to try for the Glossy Ibis. On the path to the pool I came across a 'woolly bear' caterpillar crossing the path. I believe this was the larva of the Ruby Tiger moth.
I entered Sussex Hide, which was empty, and immediately spotted the ibis on the other side of the Pool. It became more exciting when two Pectoral Sandpipers joined it. In the next shot, the head of the second sandpiper is just visible below the tail of the obvious one.
The ibis then approached a Common Snipe.
As I left Porthhellick I photographed a few butterflies.
I returned to base to make myself a late lunch, and Melanie and Georgie went off for an exploration of the island in the buggy and to book the buggy for a further two days. It was wonderful to see the rapid increase in Georgie's confidence.
Lindsay wanted to be left to rest in the property, so I headed off on foot for the Lower Moors nature reserve. My intention was to then return via Peninnis. I got caught in a shower of rain just before arriving at Lower Moors and arrived at ISBG Hide to find one person just leaving and two other people who were on the verge of leaving. A Water Rail was in view on the far side of the pool. Photographic opportunities were limited, however as, when the clouds that had shed their load on me departed, I realised that I was looking west into low sun over the water. The first shot, below, was taken when it was still cloudy. 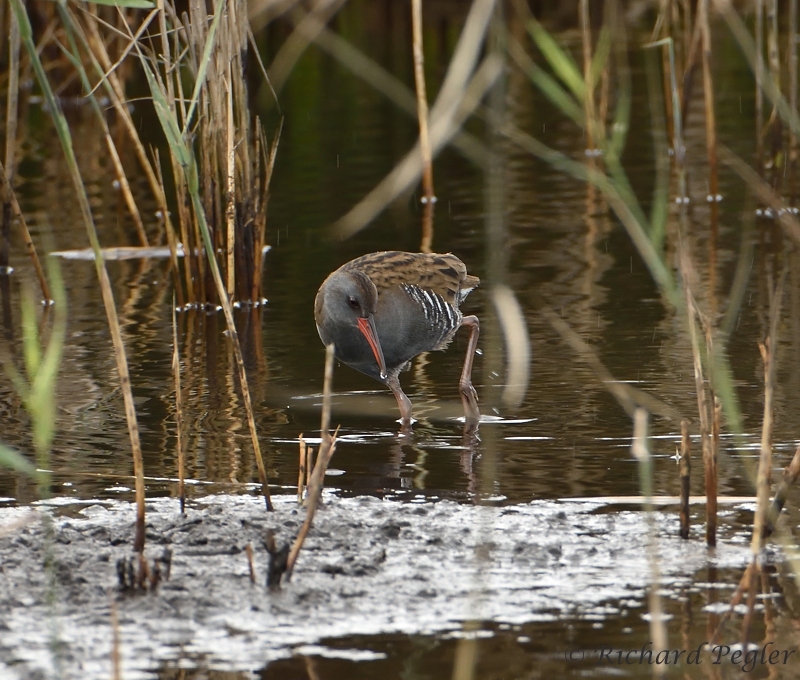 A Greenshank flew in and landed on the north side of the pool, where the light was not too bad.
The Greenshank then made a short flight to the area that the Water Rail was in, frightening it off into the vegetation. The Greenshank was now nearer but against the light. 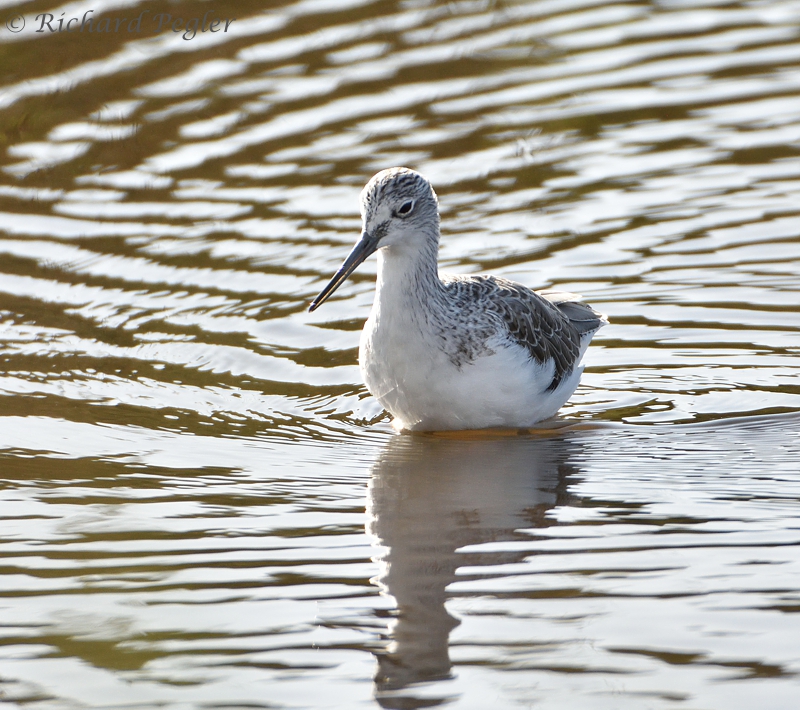 I'm pleased to note that the rail soon plucked up courage and started following the Greenshank wherever it went. A Grey Heron arrived on the scene too.
I suspect that I am not the only person who thinks that Grey Heron, and possibly herons in general, can look ungainly and a little amusing from certain angles:-
My favourite shot of all from this session is this one:-
The Greenshank decided that it wanted to have a snooze and I popped outside to the blind beside the hide to take this shot.
My intention to return via Peninnis was abandoned when a report came in via the WhatsApp group that there was a Portuguese Man O'War, with a By The Wind Sailor on Town Beach. I set off as fast as my tired legs would carry me and, thanks to the excellent location information, soon found the Portuguese Man Of War, but couldn't spot the By The Wind  Sailor - but then I didn't really know what I  was looking for. I had a rough idea of the appearance, but little clue as to the size other than it was said to be dwarfed by the PMOW!
That evening, Melanie and I went out to buy fish and chips for us all.
Thus ended a heartening and quite productive day.
This also brings me to the end of Pt.2 of my account. All things being equal, Pt.3 will follow in about a week's time. In the meantime, stay safe and take good care of yourself and nature
Posted by Richard Pegler at 11:03