This is the third and final part of my account of our autumn 2021 visit to the Isles of Scilly. You can find Pt.1 here:- http://peglerbirding.blogspot.com/2021/10/scilly-sojourn-septemberoctober-2021-pt1.html, and Pt.2 here:- http://peglerbirding.blogspot.com/2021/11/scilly-sojourn-septemberoctober-2021-pt2.html.

winday and extremely wet to start, calmer by mid day with showers and sunny periods

The forecast for this day was heavy rain and very strong winds, easing up a little mid afternoon - and this is what we woke up to. Other than popping into the garden to photograph Scillonian III arriving from Penzance, I  didn't venture out until the afternoon.

Shortly after midday, I  took a few photos from the garden of the property.
I think that this next one is a Lesser Black-backed Gull - please let me know if I am wrong!
A little later, the girls were going to go out in the buggy and I  was given a lift to the entrance to Higher Moors. As I entered the reserve, I saw a bird that gave me a ray of hope. In the past, I have found Song Thrush to be abundant on the islands, and they have been regular visitors to the the garden at the property that we stay in, even taking food from the hand. However, this was our sixth day on the Scillies and this was the first Song Thrush I had seen! It was, however, a little distant.
Sussex Hide was too full of people for my comfort in these Covid times, but I grabbed a quick shot from the doorway of a Greenshank on the far side of the pool before departing.
I had better luck from Seaward Hide which only had three other people in. Two Pectoral Sandpipers came into view, followed by three Common Snipe. 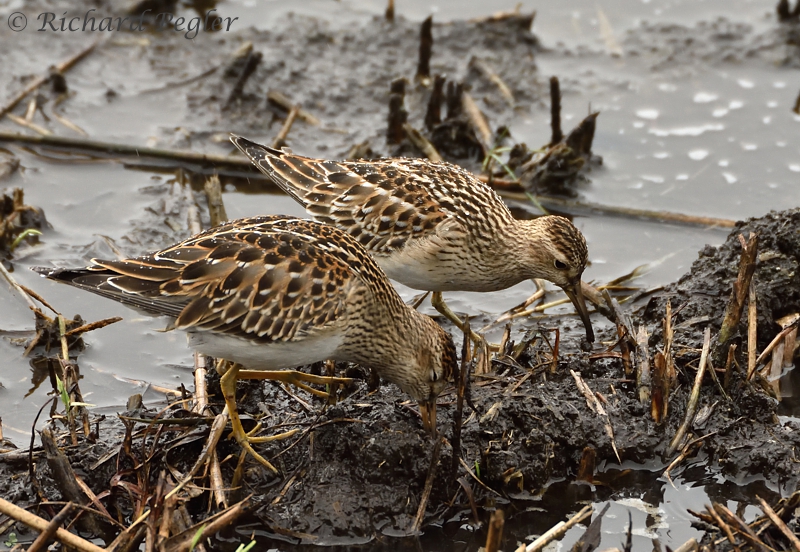 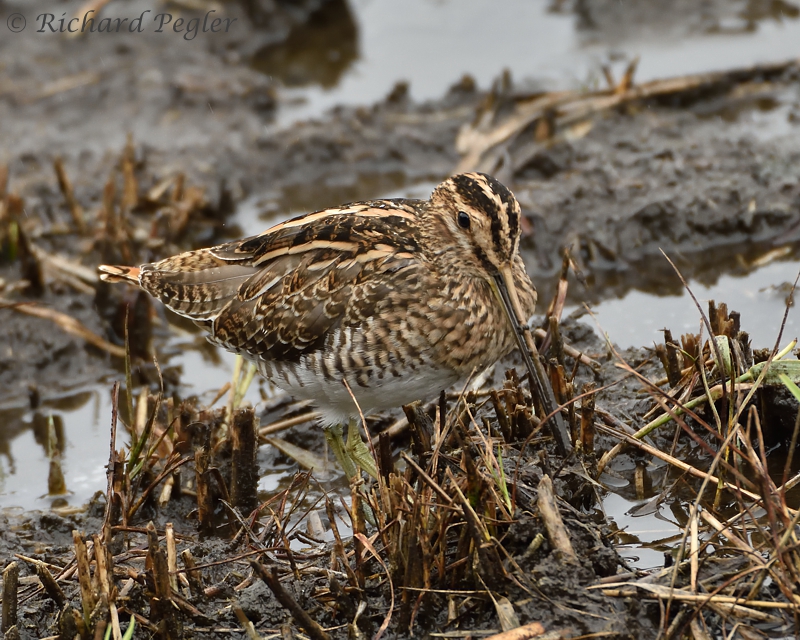 I also witnessed the arrival of the Glossy Ibis, although the light was poor and my camera settings wrong for the event, so only a record shot.
I returned to Sussex Hide, where there was now more space, and was lucky enough to have a good, but extremely brief (5 seconds?), view of the Spotted Crake (only the 2nd I've ever seen!) that was being elusive there. 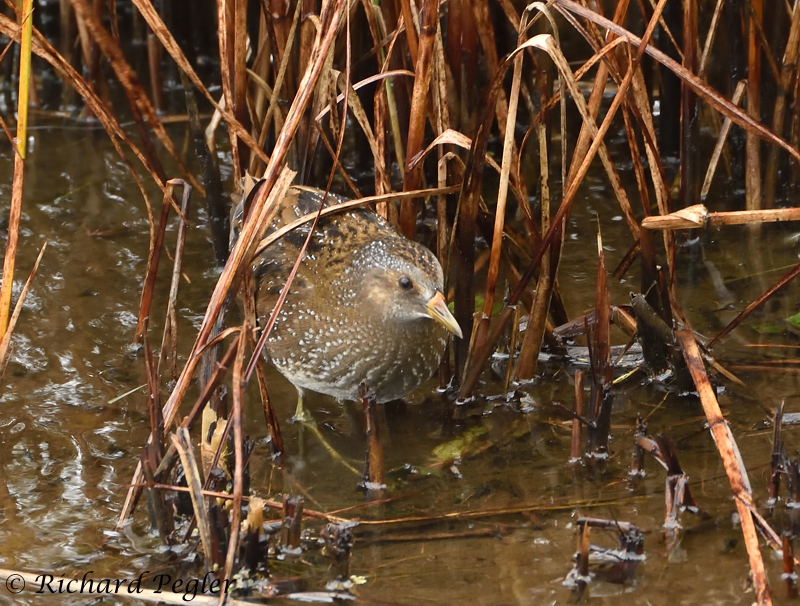 I then headed off to the the beach before taking the coastal path over Salakee Down to Porth Minick and Old Town. From Porthhellick beach I photographed a Little Egret.
As I ascended the path onto Salakee Down, I turned round to take a shot of Porthhellick, with the pool in the background.
As I descended from Salakee Down, before reaching Porth Minick, a couple coming the other way kindly pointed out two Wheatear that they'd just passed beside the path. 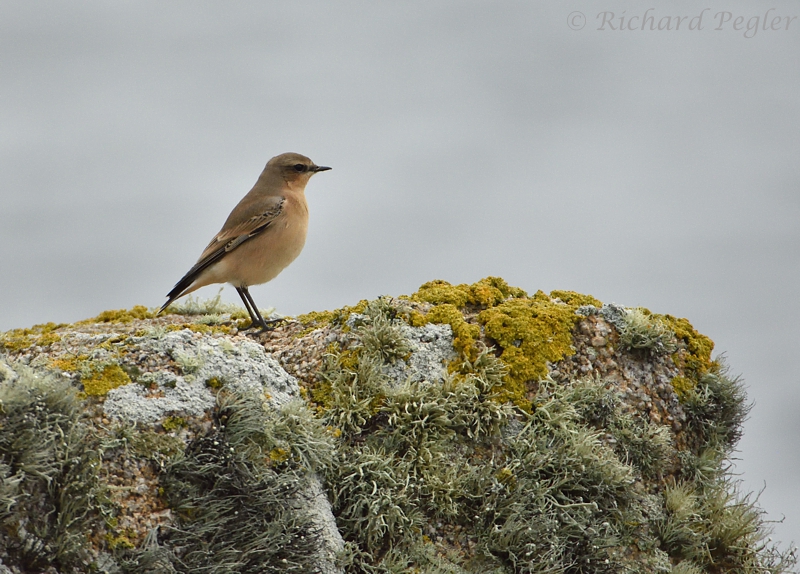 From Porth Minick, I took the short walk round to Old Town, stopping to take a photo of Amaryllis belladonna, a beauty that can be found growing in many places on the Scillies, but that I don't think I've photographed before.
I'd just reached Lower Moors when I got a message from the girls to say that the internet was now back on and they'd come to pick me up in Old Town if I would like to have a trundle around with them in the buggy. I grabbed a few shots of the Greenshank that was still there before heading back to the road to join them. 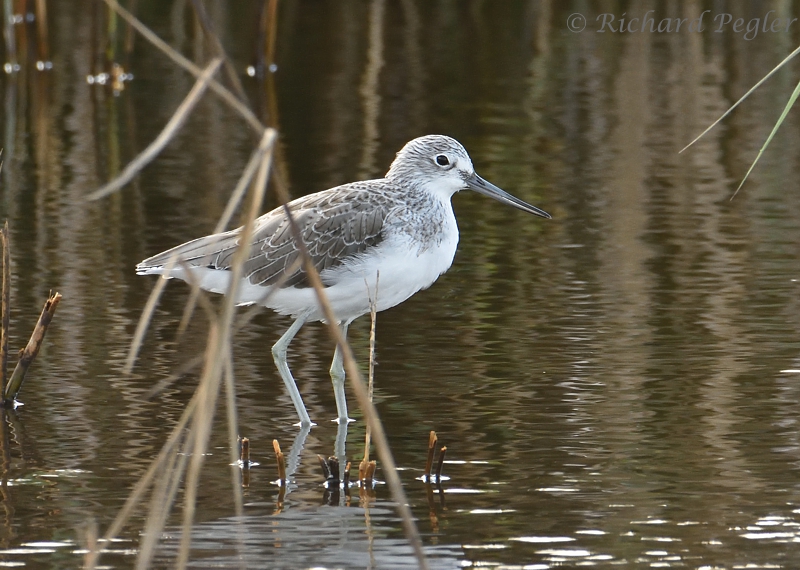 After a bit of a run around, ending up at Porthloo, where Georgie wanted to buy some fudge (there was none left when we got there!), I got the girls to drop me off by the beach. I found a group of eight Sanderling there and decided to drop onto one knee just above the water line and wait. It was only a matter of a couple of minutes before they approached me, and seemed totally unfazed by my presence, even when I started firing off shots. I reckon that I had approaches to within three metres on several occasions. 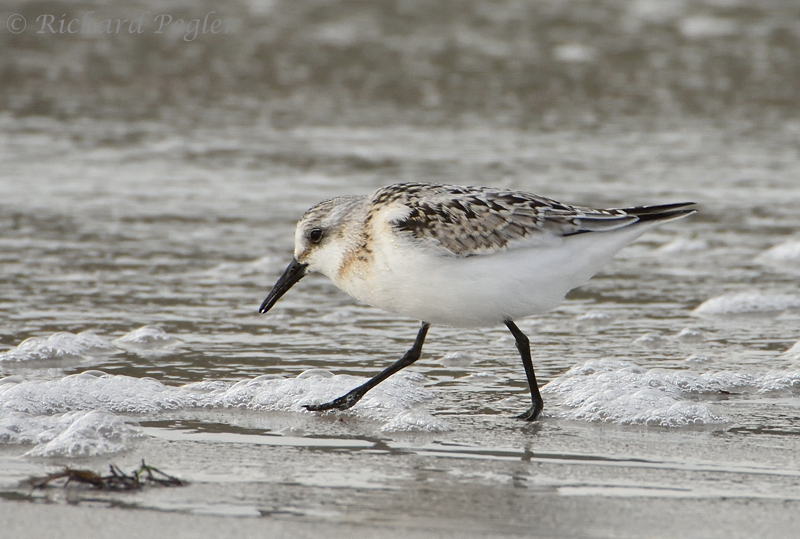 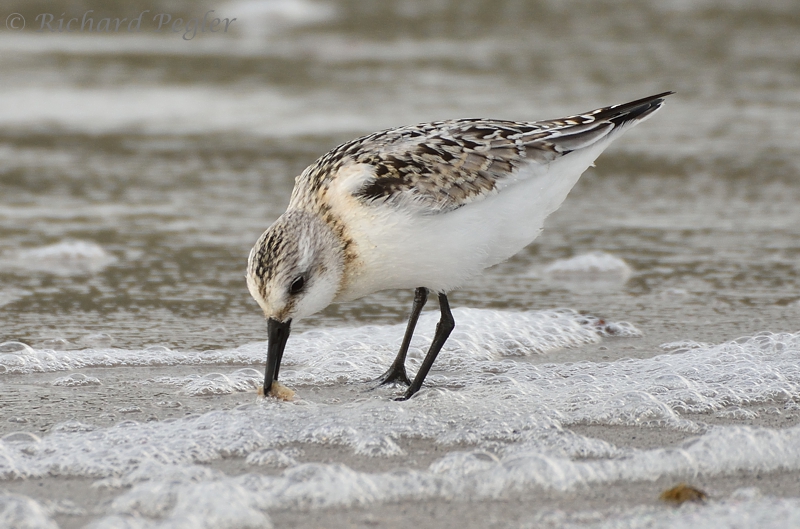 The view of Thomas' Porth from the coastal path is an attractive one.
Round the corner, in  Porth Mellon, an extremely skilled wind surfer was reaching amazing speeds, and flying high into the air when he made sharp u-turns (there's probably a term for this in windsurfing circles). He did, unfortunately, frighten off the Turnstones that I was trying to photograph. 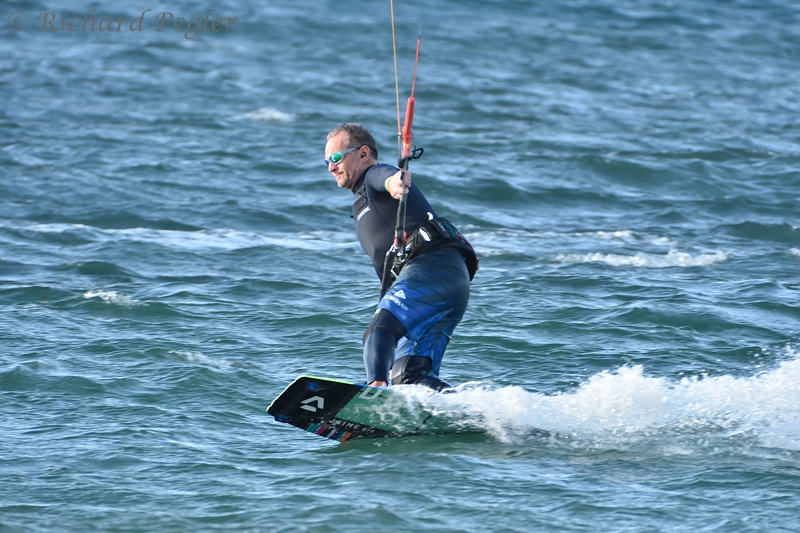 As I approached the property, a pair of Stonechat were on the beach below the garden, and even flew up onto the garden fence!
A day that started out looking as if it might be a washout, turned out to be a rather special one.

periods of heavy rain and sun in morning, mainly sunny and breezy with showers in afternoon

I awoke to the news that the Great Crested Grebe that had been hanging around the islands for a few days, was in Porth Cressa - the bay on which our base is situated. At home, a Great Crested Grebe would raise little excitement. However, the last one seen on the Scillies was in 2011! For this reason only, I attempted some shots of this distant bird, which seemed to be feeding well.

I had to stay in for most of the morning as Georgie was fast asleep, and Lindsay wanted to show Melanie the remains of the ancient settlement at Halangey Down. In the event, I got the better end of the deal as they got absolutely drenched in a massive downpour.
I did manage to get out briefly late in the morning, and went to check for Humming-bird Hawk-moth on the Red Valerian above Sally Port, on the Garrison. I was not lucky on this occasion. I did take a few photos on the Porthcressa sea front on my return, however.
After lunch, and another heavy rain shower, I set off for a gentle walk, mindful that I had a long drive ahead of me the next day. From base, I crossed over to the other side of the isthmus and headed north, walking the length of Porth Mellon beach, taking a few photos as I did so.
I then took the coast path to Porthloo where I first tried for some shots of a distant Little Egret on the bar to Newford Island. 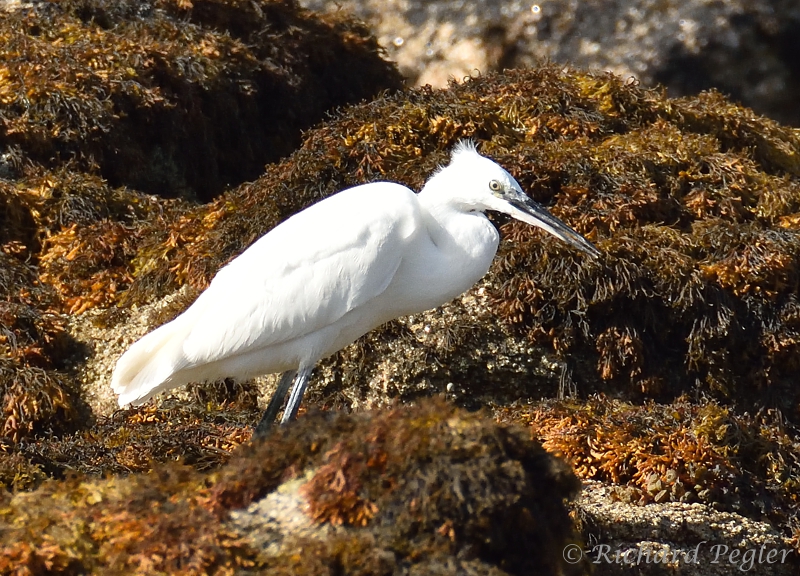 I was also reminded that egrets can look just as ridiculous as herons! - see my previous post. 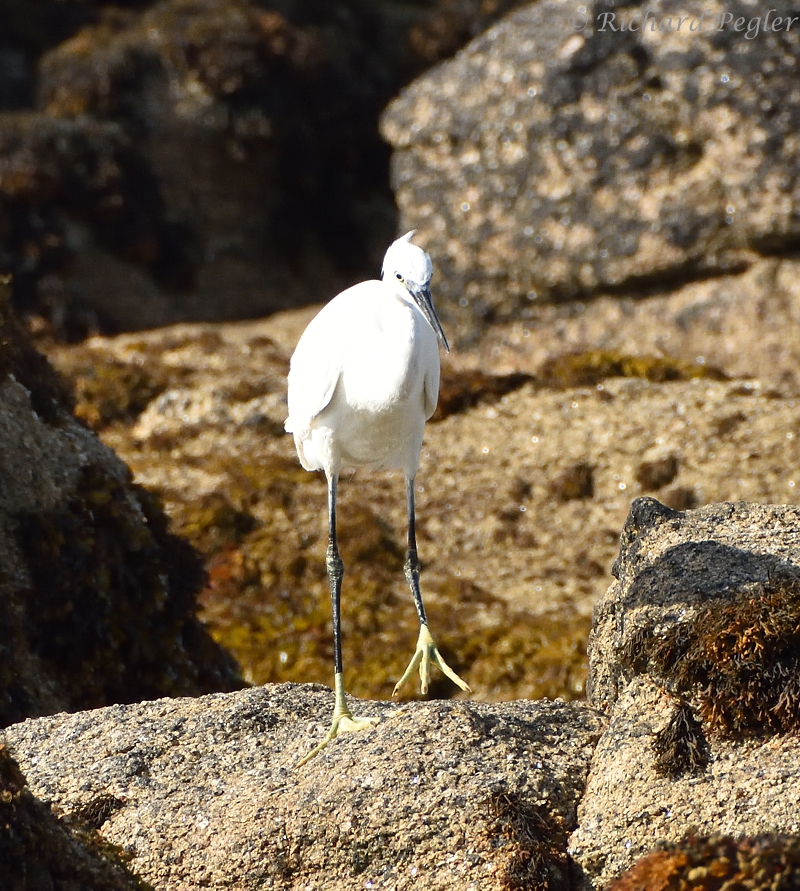 On the main beach at Porthloo, I found a gathering of around 50 Turnstone, with two Sanderling. The Turnstone were, as usual, extremely confiding. 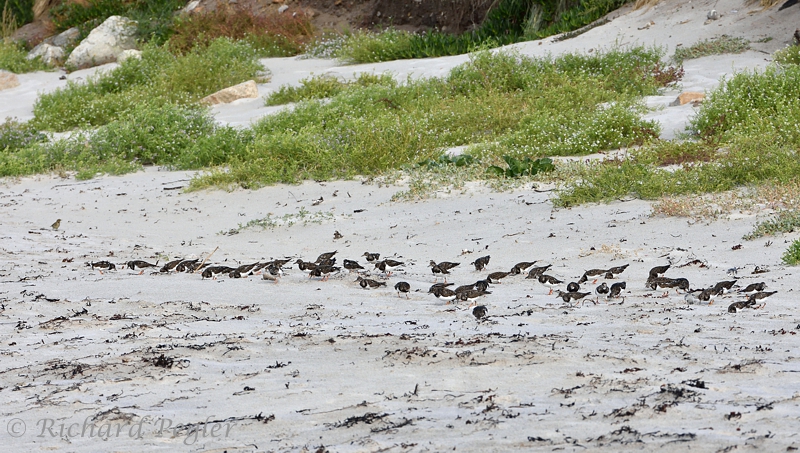 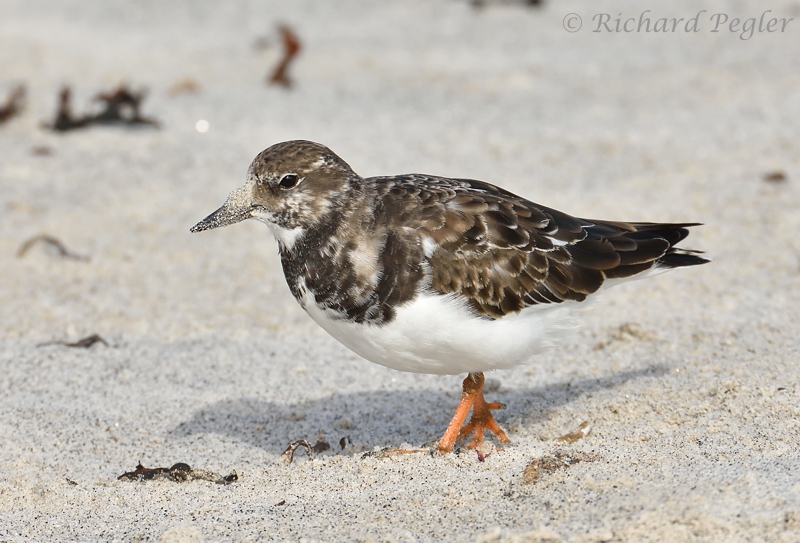 I couldn't resist more shots of Sanderling too. 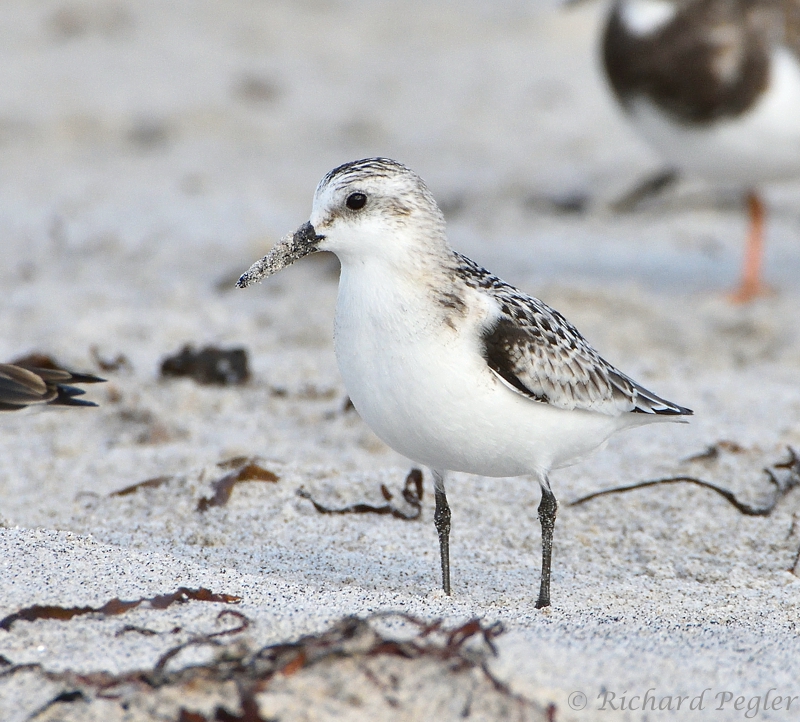 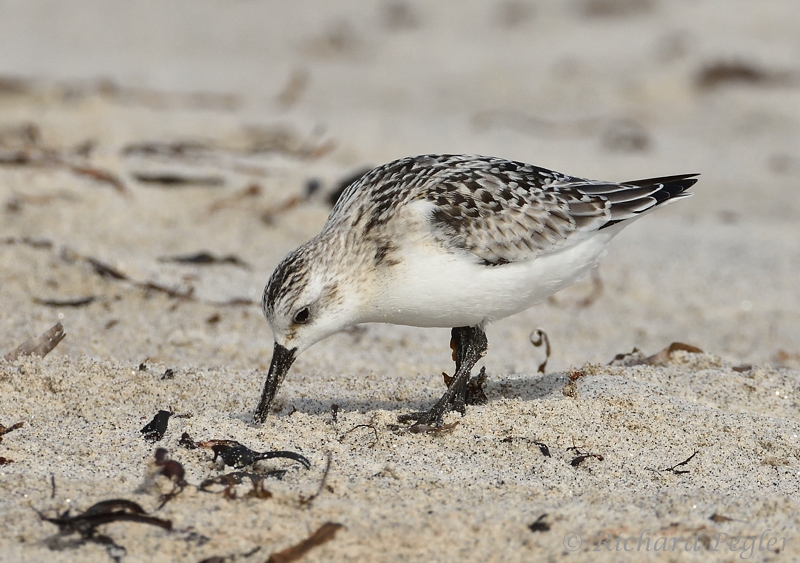 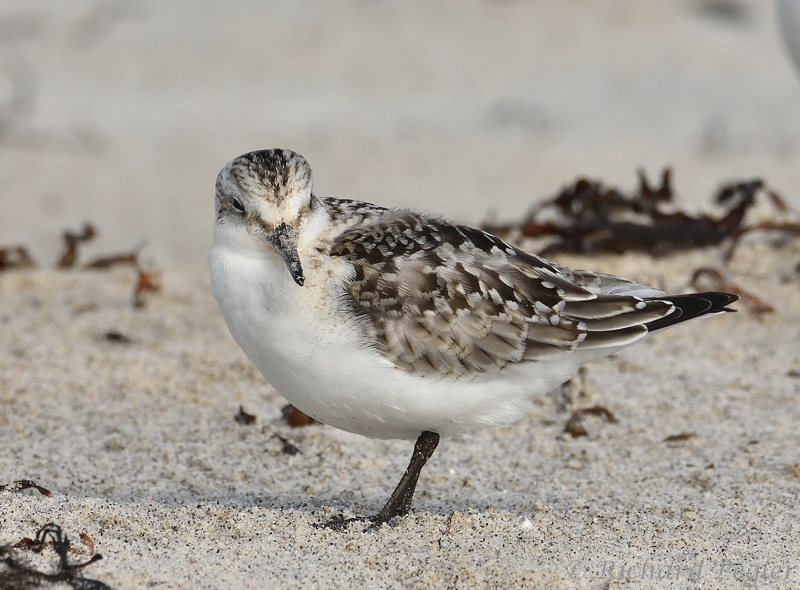 After that, I set off for Rosehill Gardens where I  spent some time looking for dragonflies, only finding four very mature male Common Darters. 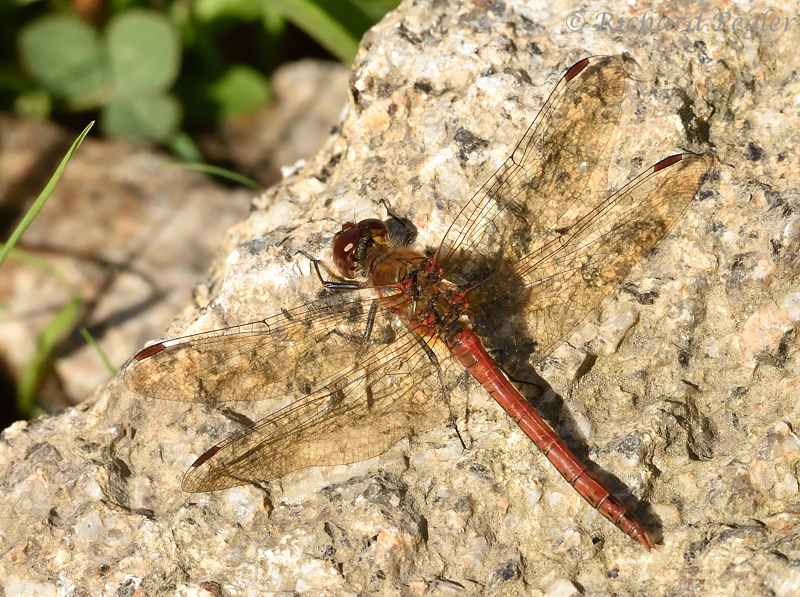 While at Rosehill, I  got a message from Lindsay to say that the three of them were setting off in the buggy to go to 'Treasure Beach' (Porth Minick) to look for sea glass if I  cared to join them. As it was a relatively short walk for me to do so, I  let them know that I was on my way. En route, I called in very briefly at the two hides in Lower Moors,  but saw nothing of interest.
We had a most enjoyable time together and were the only people on the beach. After this, I joined them for a ride back towards base, leaving them again by the hospital so that I could have a last walk down to Porthcressa from Buzza Hill.
At five o'clock it was time for me to take the buggy back to Scilly Carts. The hire had been a great success.
Monday, 4th October          St Mary's - Land's End Airport - Ashby de la Zouch
cool, wet, and windy to start, later becoming dry and warmer
After breakfast and packing, I popped out into the garden to take a 'farewell' shot of the bay before our departure.
We had to vacate the property by 10.00, and our flight was not until 11.40. Usually Paulger's Transport, who operate the Skybus airport transfer service on St Mary's, pick up an hour before booked departure time. I'd alerted them that we'd be ready from 10.00 but, in the event, they did not arrive until 10.40.
The flight back to Land's End was uneventful and, on arrival, Melanie and I went to collect our cars while Lindsay and Georgie guarded the luggage. We then said our farewells and headed homeward.
We stopped in Penzance to pick up some sandwiches and other bits and bobs for a picnic and then wended our way home, with a few pit stops along the way.
It was a pleasant journey, but the arrival at home was far from pleasant. We immediately noticed that the house was very cold - and then we found that something had tripped-out the electricity distribution board and three freezers and a fridge, all full, were now at room temperature and the contents putrifying - indicating that the event probably happened soon after our departure. Sorting this out kept us occupied for most of the rest of the week.
Nevertheless, it had been a truly great holiday with the family, and we are very much looking forward to returning next year.
My next blog post will probably be a very short one and cover my observations from the garden and a nearby location. Until then, stay safe and take good care of yourself and Nature - - - Richard