Up until around a couple of years ago, a three-owl day when out owling in these parts would have been considered to be below par -  the norm was usually somewhere between four and seven Little Owls per session. Things then began to take a dive in the spring of 2016. There was a small recovery in the number of sightings early in 2017, but then the situation declined dramatically after May this year, with only two or three Little Owl sightings a month (none in September!). I was, therefore, excited to sight three Little Owls over three different sites on 3rd December. However, to achieve this, I did have to break away from my recent 'close to home' initiative.

The first sighting was at my LO Site No.37. At first I couldn't see an owl here, but then, by moving position, managed to spot one hiding in the branches. I then managed to find a better, but not great, position. It had, of course, already seen me!

By changing position again, I managed a less obstructed view. It would have been nice to have had a clear view, but this was better than nothing.

I didn't stay out for long and, having had a quick picnic lunch, I headed homeward again. I was delighted to see a Little Owl once more by my Site No.41. The nest tree came down earlier in the year and the owls disappeared a few weeks afterwards, having spent some time living in the fallen hollow trunk of their tree. I'd then gone from the end of May until mid-November without seeing an owl here. 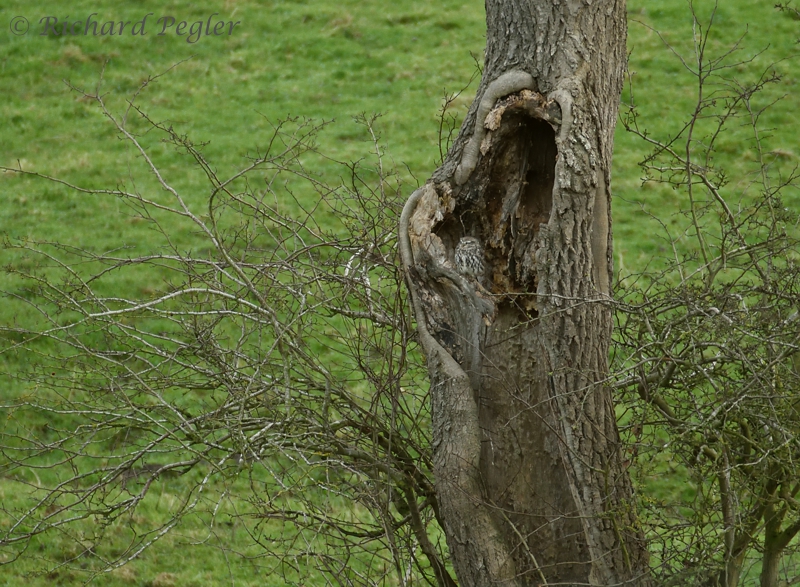 My final sighting was after dark (so no photos) at my LO Site No.02.

OK, so three owls is nothing to write home about, but it was a wonderful day as far as I was concerned!

I'm not sure what my next post will be about. With the recent cold weather, and heavy snow forecast for tomorrow, I'm not sure what the photographic opportunities will be, but the garden birds are on the increase with 20 species dropping in so far today. However, Mrs P. is away for six days from tomorrow, so I might even spread my wings a little!

Thank you for dropping by.
Posted by Richard Pegler at 15:30