With Mrs. P. going away with our daughter and granddaughter for six days for a stay in a 'crafting hotel' in Devon, I was looking forward to some wall-to-wall birding - but more about that later!

December tends to be a busy month for most people, and we are no exception, with the preparations for Christmas, and meeting up with family over a good lunch taking up a significant amount of time. Apart from the 3-owl day on 3rd December which was the subject of my previous post, it had been a slow start to the birding month. In fact, most of the excitement (for want of a better word!) came from the garden. Here's how the first half of the month panned out.

The month got off to a good start with a Goldcrest visiting the garden. Sadly, I only managed a record shot through the glass of my study window at a range of about 14 metres.

Later that day I paid a quick visit to Oakthorpe Colliery. Most of the birds there were relatively common and quite numerous, but it is always a treat in these parts  to see a Willow Tit - they're becoming worryingly scarce.

From Oakthorpe Colliery, I moved on to a farm near Packington. Here I found a Buzzard on a fence post, and later a Kestrel.

I was back at home by early afternoon, and a racket from outside caused me to look out. A Buzzard was being hassled by a Crow. I only managed a few shots before they went out of view.

This was the previously mentioned and posted 3-owl day. However, I have one other image to share with you from that day. A small downside of heading out into the countryside in these parts at this time of year is the amount of filth on the road. It's not unusual to come back after an afternoon out to find the lower half of the car thick with mud and other detritus. Fortunately there is a car cleaning operation close to home where I can get the car washed for £6. However, I think these people will be retiring soon on the money I'm spending with them!

Just to give you a taste of what I'm faced with, this is a shot from my car window as I waited on the verge for this group to pass. 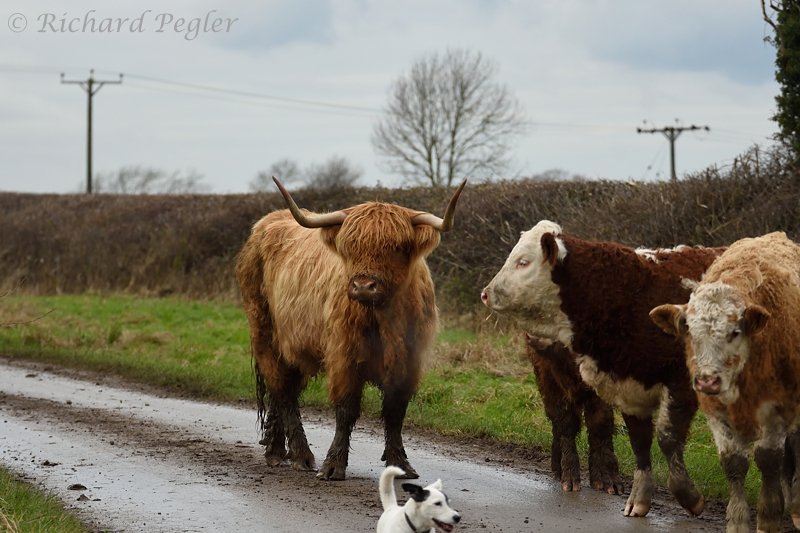 Here's a slightly different shot of one of the day's owls, given a different treatment to those in my previous post - I quite like the result!

Nothing much happened until this day as I was very busy with other commitments and preparing for my wife's departure on holiday. However, on this day, we had Goldcrest and Grey Wagtail visit our garden, neither of which I managed to photograph - nor did I get a photo of the male Sparrowhawk that visited. Here are a couple of photos that I did manage to take.

The original plan was for Lindsay to go over to our daughter's in her Smart car in the late morning, and then for the three girls to head on down to Devon in Melanie's car. However, heavy snow had been forecast for the Saturday/Sunday night and so we put a contingency plan in place. We woke up to a good covering of snow, and so the contingency plan was implemented - I was to drive Lindsay to Melanie's in our 4x4 Yeti.

Before we departed, we had a Fieldfare briefly stop in our garden, shortly after another visit by the Sparrowhawk. The Fieldfare only stopped for a few seconds as our berries had all now been consumed, and I only managed a record shot - we don't usually get Fieldfare visit the garden more than once or twice each winter.

The 25 mile (40km) journey to Melanie's place took two and three quarter hours (instead of the usual 35 to 40  minutes) with very icy roads. A large part of the delay was caused by a large rig belonging to the Walkers Crisp company. The inconsiderate driver of this rig spent from 10h00 to 11h30 shunting backwards and forwards on a gradient on a dual carriageway trying to get traction, holding up all who were behind him. He could have just rolled back to the side of the road and allowed everyone through. I'm amazed that no one went and hauled him out of his cab. One comment from the bus driver two vehicles behind him was that he was probably empty and so did not have enough weight to get traction, but I suspect that a full load of crisps (potato chips to some of my non-UK readers) weighs the square root of bugger-all and would have made no difference.

Having, eventually, dropped Lindsay off at Melanie's I headed off into the countryside with the hope of finding owls in the snow and finding a nice location to enjoy my picnic lunch. I soon found some nice snowy scenery, but I was not seeing many birds at all. 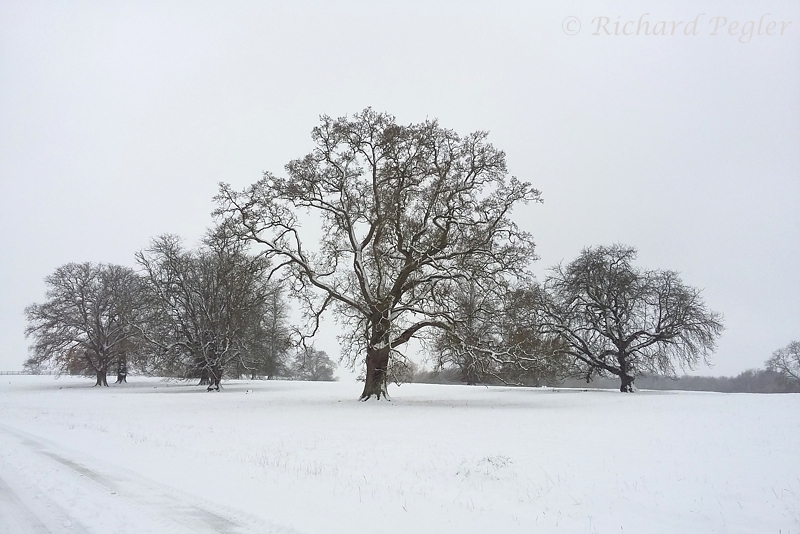 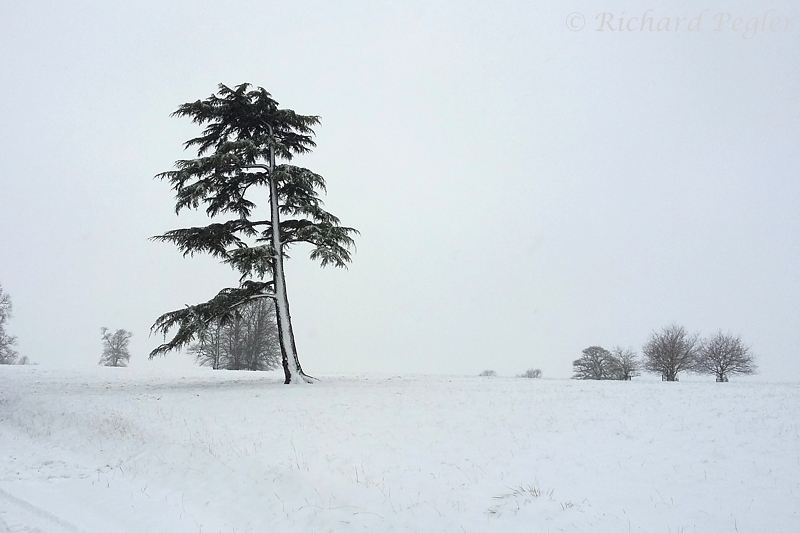 Although there was far less snow here than there was at home, the road was very icy and, having stopped for that second shot,  I struggled to get traction - even with the 4x4! After about five minutes I managed to get up the hill, but decided that I'd find a place nearby for my picnic, and then head straight home again, avoiding single-track country roads!

On the Monday I'd had to go to a nearby village to post letters and parcels, and found the roads to be still quite difficult, and it was apparent that, no matter how careful one was, there were too many idiots on the road who were driving without due care (as witnessed by the ones that were already in the roadside ditches!), so I spent most of the day indoors. We had one of our occasional visits by Great Spotted Woodpecker. 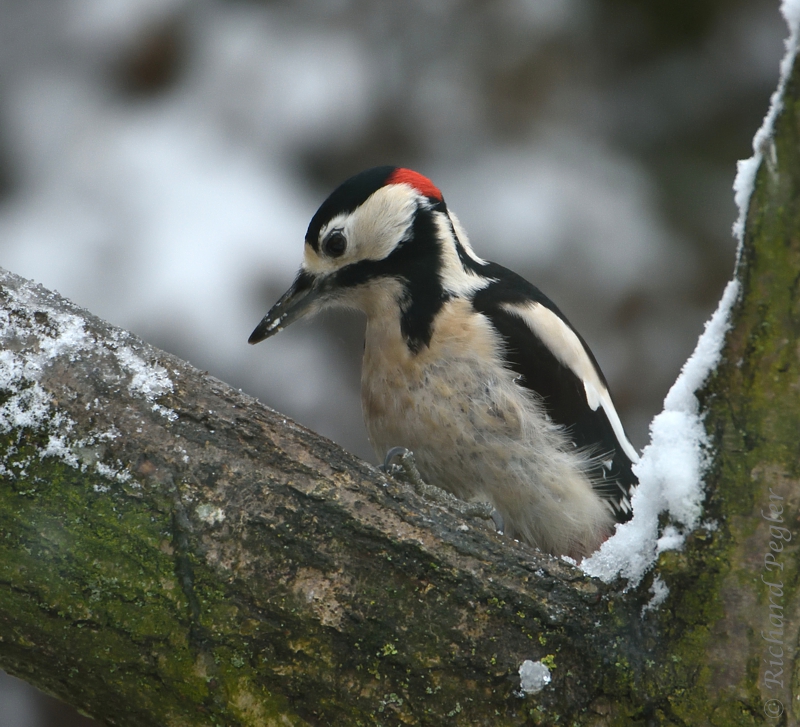 By the Tuesday I realised that I was going down with a cold, and that going out in the cold was probably not sensible.

This gave me another opportunity to observe the birds in my garden. As well as a second Fieldfare (missed the shot!) I had my first Garden Redwing of the winter. However, I only got 'record' shots as I was looking up at it through the double-glazing of our conservatory at an angle of 45°, though intervening branches. Here are some images from that day. 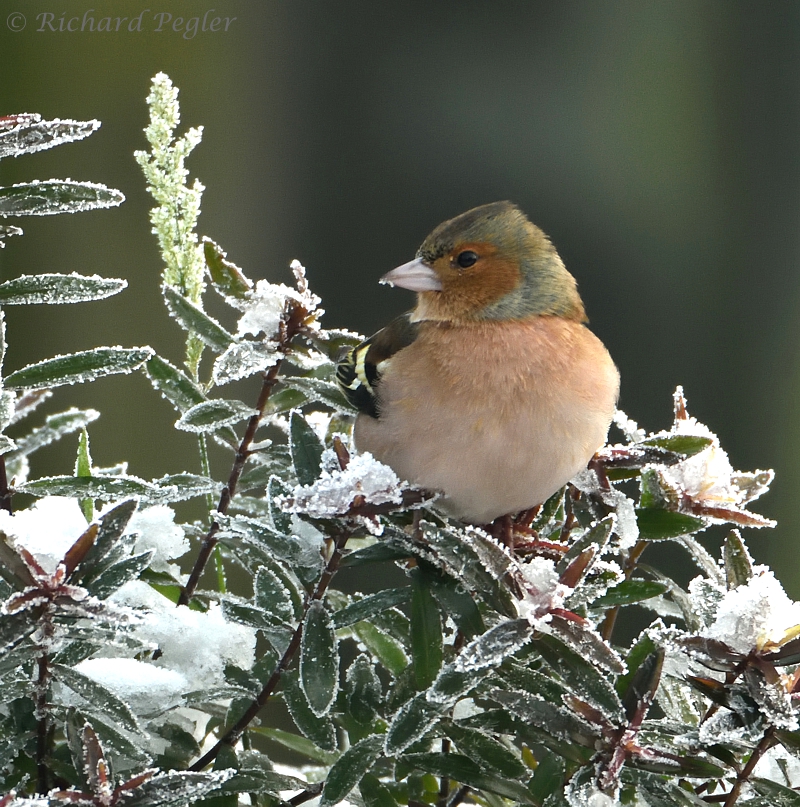 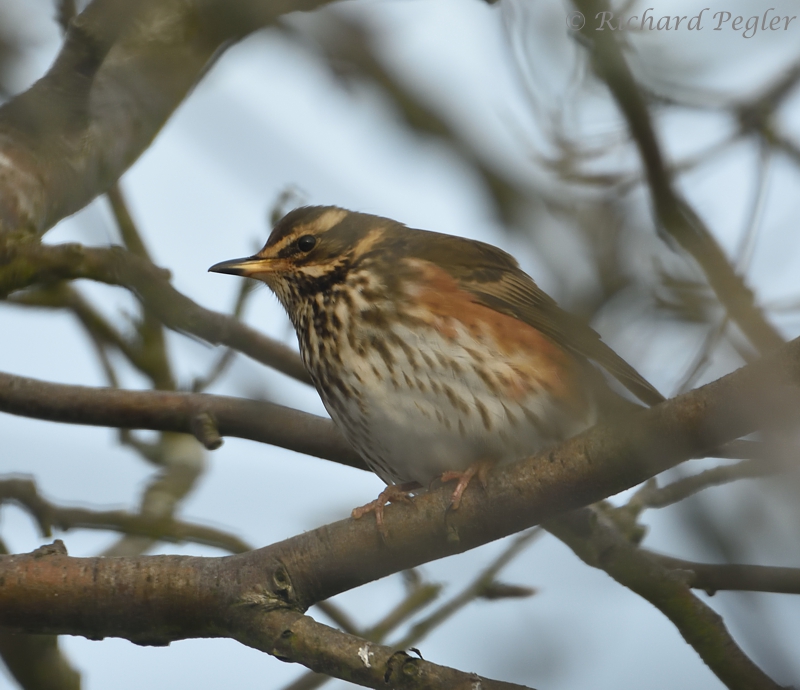 On the Wednesday I'd been out in the morning to the south of my home dropping cards in to some of my owling hosts. There was still plenty of snow around. I'd taken my camera, but didn't see any owls and didn't take any photos. However, I did have the good news that a Little Owl was seen only three days previously at my site No.03. By that afternoon I was feeling decidedly off-colour so did very little.

On the Thursday, I still had a card and present to deliver to a farm some way from my home, so I set off in the morning, taking a picnic lunch. We'd had more snow in the night, and the roads close to home were worse than they'd been on the Sunday morning. On one bend I found four vehicles off the road. Fortunately, by the time I got to the outskirts of Leicester you'd never know that it had been snowing, although there was a little more snow when I neared my destination. As I was seeing virtually nothing of interest during my travels, I set off back homeward.

An enforced diversion due to a road closure sent me past the end of Cropston Reservoir. Determined not to get home with nothing in the bag, I stopped when I saw a space in the lay by.

There was little to see that was identifiable through my binoculars, but at least I took some shots, even if they were of common birds, and into the sun! 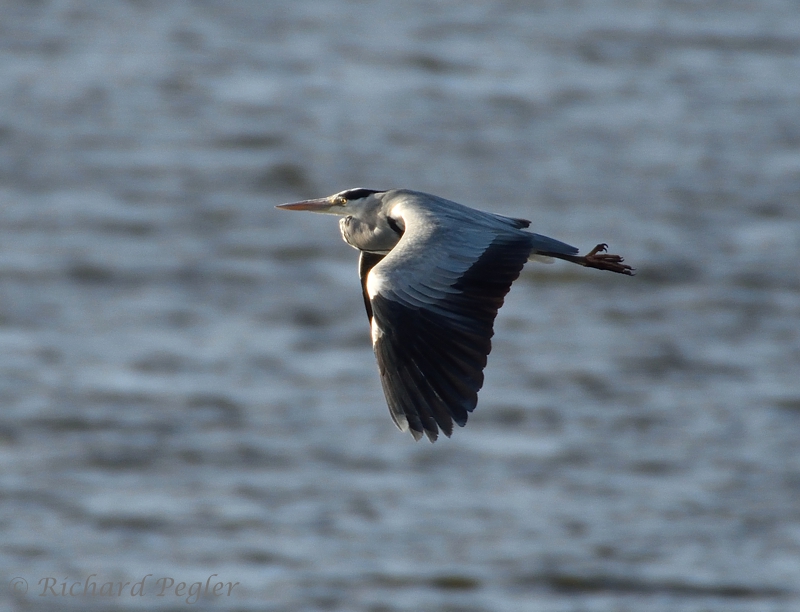 Since then, I haven't managed any photography, so I suspect that this will be my last blog post before Christmas. I, therefore, take this opportunity to wish my readers a peaceful and happy Christmas, and the best of luck and good health for 2018. Thank you for your kind support in 2017, which has been much appreciated.