It had not been a particularly good year for my owling so far, as I've been busy demolishing old built-in wardrobes and painting and decorating in our bedroom. I'd only had three sightings of Little Owls at just two of my LO sites. However, I am now at a point that I can do no more until the new fitted furniture is installed, and so yesterday afternoon I went out to do a bit of owling.

My first port of call was my much-photographed owl which lives in an old barn on my 'local patch' near Packington - Site No.02. My last sighting here was just three days previously. Arriving just before 13.00. I found the sole surviving owl out on the chimney. Although it was poorly positioned for photography, it sat there very calmly whilst I wandered round and took a few photos. The second image is typical of my usual meeting with this bird as my approach to the site is usually straight into the sun! 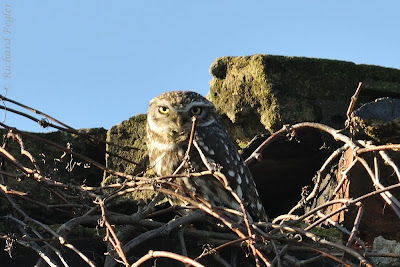 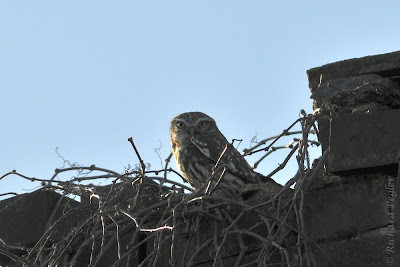 Little Owl - my Site No.02
Leaving this owl still sitting there, I wandered up the road to another of my sites, on the same farm - Site No.12. Having had a quick chat to the farmer, I went off to try and find an owl. My last sighting of a LO here was on 9th August last year, so I was delighted (and frustrated!) when I turned a corner and put up one of the owls from behind a barn. It briefly settled on a distant roof, and then disappeared. I tried to relocated it, but the possibilities as to where it might be were endless, and it was not seen again. 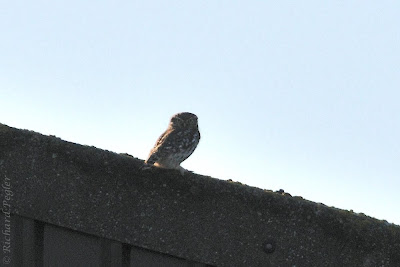 Little Owl - my Site No.12
Leaving here at about 13.30, I headed back to my car, where LO at Site No.02 was still on the chimney. I then set off for my most recent LO site - Site No.16, near Newton Burgoland. I've only had one sighting here, on 7th December, 2010, in freezing fog. I've been back several times, but not relocated a bird. I didn't have any better luck this time!

I next spent an hour or so looking at potential owl sites in the hope of finding a new Little Owl, but with no success.

Next stop was at my Site No.03, at Upton. I last saw a LO here on 15th March, 2010. No luck on this day too!
Not far away is my Site No.09, near Sibson. My previous sighting here was on 28th August, 2010, when there was an adult and a juvenile on the nest tree. I arrived at 15.35 to find an adult bird sitting by the nest entrance. The gate to the field is a good 200 metres from the nest tree. I don't know whether it was the two Crows in the nest tree, or me opening the gate that frightened the bird back into the nest hole - but no images taken there.

Heading back towards home, I stopped on the road close to my Site No.05, near Snarestone. I've only ever seen a single bird here, my last sighting being on 31st October, 2010. There was not a bird visible.

On the same farm is my Site No.06. This is only reachable by a longish walk, and then through a noisy gate - alerting the birds to your approach. My last sighting here was on 28th August, 2010, when I saw one of the two birds. This time I was lucky. One of the birds here tends to be quite confiding, and this was the one that was out. By now, it was 16.10, and the sun was just about to disappear, casting a golden glow over everything. I took a number of shots and the bird seemed totally unfazed by my presence, even looking away at one point. I left it sitting there and went off to see if I could find the second bird in one of its favourite roosts, but didn't spot it. 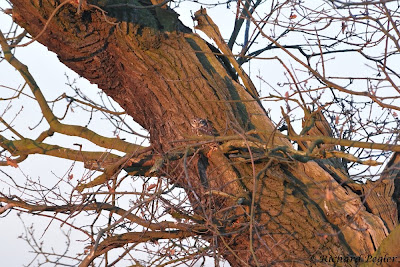 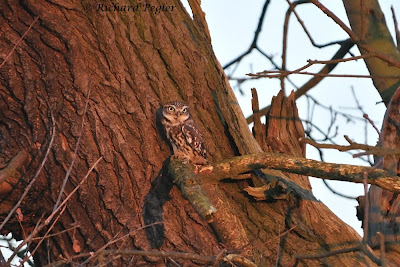 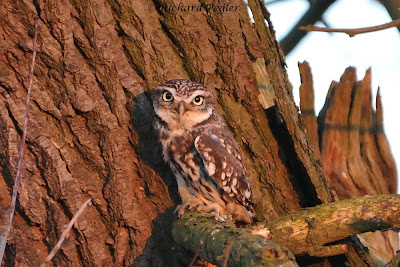 Little Owl - my Site No.06
My route back took me back past the nest tree, and the the owl had moved less than half a metre to the entrance to the nest hole. However, in just 10 minutes the sun (and the light) had gone. This time I was a little more bold with my approach to the owl. The image below was taken with the lens at 400mm - 60th second at ISO 3200, handheld!!! I assure you that I took a hell of a lot of shots in order to get one that was vaguely usable. I was close enough that I could have got a far better image if I'd used the in-built flash on the camera, but this bird was so confiding that I did not wish to upset its confidence. 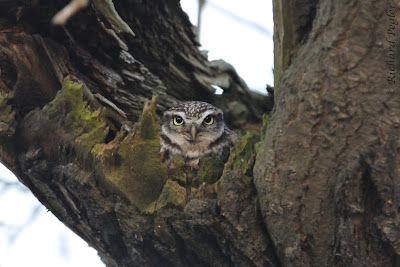 When I left the scene, the bird was still sitting at the nest entrance.

This is probably one of the best owling days I've had since early last year (although not too special photograpically) - Little Owls seen at four out of seven sites visited. I am encouraged!
Posted by Richard Pegler at 19:47