Some months ago, when giving an update on my Little Owl sites on this blog, I reported that I'd not seen owls at my Site No.03 since March, 2010 and that I thought that I'd possibly found the site shortly after the nest tree had suffered a catastrophe (50% of it on the ground), and that the owls had probably moved on. I've been checking it out from time to time when I've been in the area (it's a bit off the beaten track for me), with no luck. On Saturday I parked opposite the tree and sat quietly for 10 minutes and then noticed a small movement - was that an owl behind the leaves? Yes, it was! I quickly sought access permission from the owner of the garden (thought I'd better as it was over a year ago that permission had previously been granted), but didn't manage to get a photographic bead on the bird before it was gone. OK, so the following two images (obtained from the roadside before entering the garden - and straight into the evening sun) are rubbish, but they mean a lot to me! 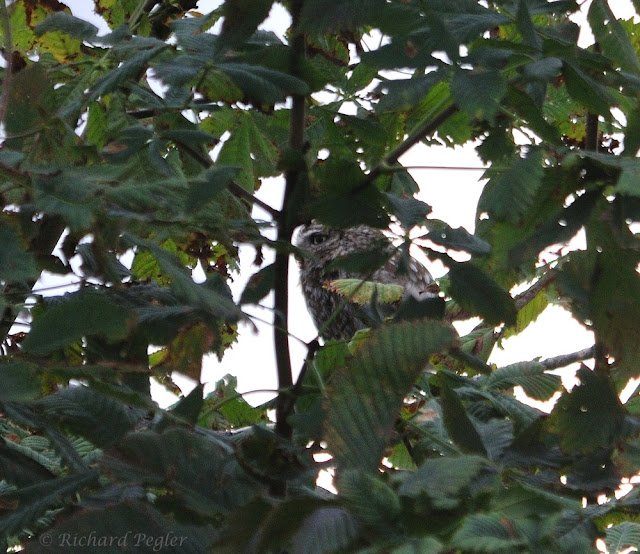 Two days later I was over in Staffordshire getting some garden bird food. On my way back I called in at my LO Site No.15, where I've not seen an owl on my previous three visits, and where access is extremely limited due to the nest tree being in the middle of a cultivated field. I soon located an owl just peering over the top of a dense covering of leaves.
By moving along the road a bit, I got a better view - then I spotted a second bird in the depths of the tree. It was well camouflaged when I took the first image, but then the sun came out and lit it up a bit. 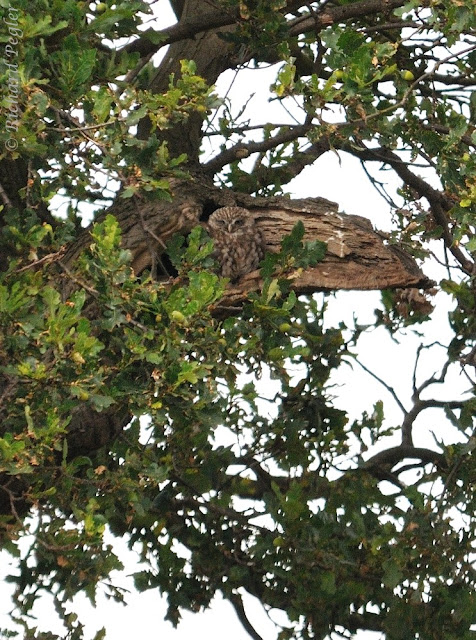 Whilst trying to find a better vantage point I noticed, through a gap in the crop, yet another owl on the ground near the base of the nest tree. This was almost impossible to get an image of, due to the intervening crop - this is the best that I could manage.
As mentioned in a recent post, most of the juvenile Little Owls that I am seeing now are so far developed that it is difficult to tell them from the adults. I'm relatively confident that bird no.3 is a juvenile, but I'm not sure (from this distance) about the other two.
Posted by Richard Pegler at 14:18