I've got to the point that I now realise that I've had my head turned by the Short-eared Owls that are just up the road from me, and my Little Owls have been sadly neglected. It's probably not too difficult to work out why. The SEOs are close at hand, and they're always there (for the time-being, at least). I've been going to see the SEOs two or three times a week since the beginning of November, and only not seen them once - when it was blowing a gale, and I only went to confirm that this was just too much for owls to be out in. Little Owls require a little more work and, even when the weather is favourable, it's anybody's guess as to whether you'll find one, even if you know where they live. In summary, I've been taking the lazy option (although I've put in a lot of hours at the SEO site). There's also the social aspect too. For the most part, Little Owl watching is a solitary pastime, whereas it's a rare day that I don't have someone to chat with at the SEO site.

Anyway, with renewed resolve I have started to do something about my Little Owls.

The weather was not brilliant (dull and +1deg C) but I had a couple of hours to spare in the afternoon and popped up to my local patch. At my Little Owl Site No.12 I found an owl in a barn where I'd never seen one before. I took a few shots, before continuing to check out the area.

I didn't find anything else of interest during my travels, but the owl was still in the same place when I returned!

After this, I took a trip down the road to my Site No.02, but nothing was showing. I then went another couple of miles and took the walk to my latest LO site - Site No.25, but no sign of any owls there either (I've only seen an owl here once, and then missed getting an image).

By now I was weakening, and set off for my local SEO site. Three SEOs were seen but, as penance for my weakness, I'll not publish any images here!

In response to a call from someone who had seen Little Owl in his garden, and had found some pellets under a tree, I had a late afternoon appointment to visit and investigate. On the way I called in at my LO Site No.02. An owl was sitting out on the barn.

To my amazement it flew, but landed in a tree somewhat closer to me. I am a little concerned as I see that this bird now seems to have a growth on its forehead.

In the morning I went out to get some bird food. The garden birds are eating me out of house and home - my shopping list included 60 kg bird seed, 5 kg peanuts, and 2 kg niger seed. I'm hoping that this will last until the end of March, but at the current rate of consumption I don't stand a chance!!

My route, with only a minor diversion, takes me past my only Staffordshire LO Site. Both birds were out but their tree is in the middle of a field that is currently under cultivation, so I could not approach for photography. Both birds are in the image below, but you're doing well if you can find them!

After lunch I went out for a little more serious owling. Nothing was visible at my LO Sites Nos. 16 & 17, but at my Site No.03 I was lucky enough to find two birds out. I spotted the one in the nest tree first, but as I approached (this is the site where I have to walk past the bird without looking, and then turn round to take the photo) I found the second bird on a distant post.

I then turned round for the photos of the first bird. The second of the two images shows just how well camouflaged these birds can be in this tree. 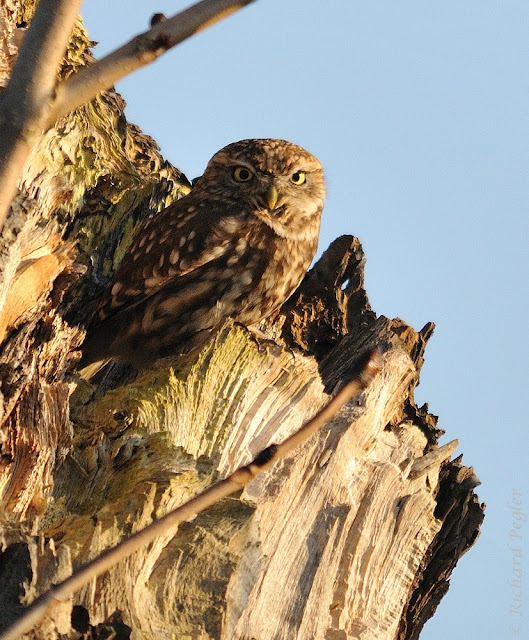 After this, I visited my LO Sites Nos. 9, 5, and 6, but without success. At Site No.06, however, I couldn't resist a photo of a Brown Hare in the warm (in colour only!) evening sunlight.

The light was failing fast and I decided to divert back to Site No.16, and ominously found a Sparrowhawk on top of the building where I sometimes see the owls.

By now it was far too dark to contemplate any more Little Owl photography, so I set off home, via my local patch. As I reached the boundary of what I consider to be my patch, I spotted a suspicious shape in a tree - Little Owl!! This was over half a mile from my nearest LO site, so I'm calling it my new Little Owl Site No.26. As it was all but fully dark, I only managed some poor images at ISO 3200 and 1/60 second exposure. I must now return and try for some better ones!!

Am I pleased to be back with the little'uns? You'd better believe it!! OK so there is something awesome about a larger owl, and watching them fly is inspirational, but the Little Owls are just so appealing.
Posted by Richard Pegler at 21:07