With a resolution to check up on some of my Little Owl sites that I've neglected this year, and also to try and find some new sites, I set off for Calke Park on 24th November, with a picnic lunch.

Some five minutes or so away from the entrance to the park I stopped at a place that looked rather 'owly' and had a look round. Up a track, which had free public access, I looked at a tree and thought that I might be looking at an owl (it was in deep shade at about 280 metres - as measured on Google Earth). As I approached on foot I became aware that it wasn't an owl, but I continued to look and lo-and-behold there was a Little Owl sitting on a post about 40 metres from the 'non owl' and about 50 metres from the track. I grabbed a few quick frames before departing. This is my new Little Owl Site No.49.

I continued to search the area for signs of other owls, but without success. As I returned past where I'd seen the owl, I found that it had now moved up into the tree above the original post that it had been sitting on. 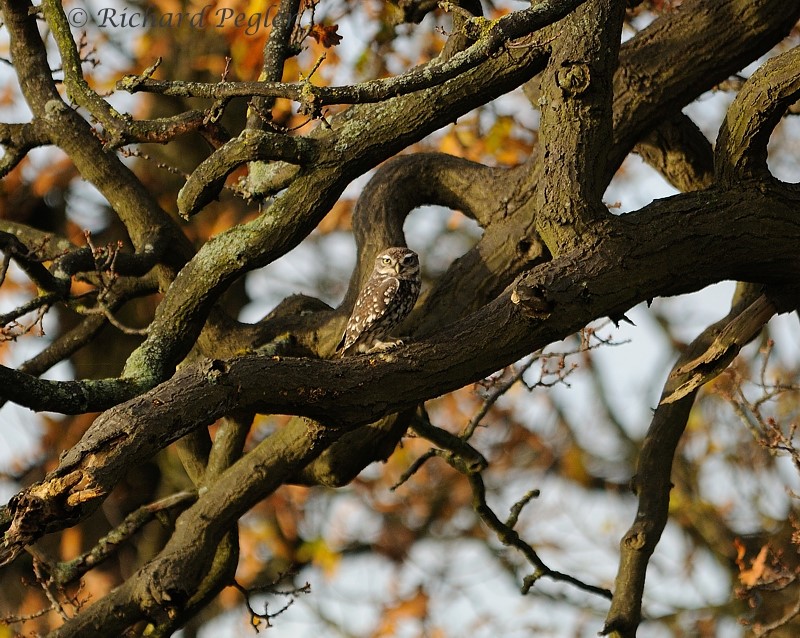 No more owls were seen during that relatively brief excursion, but I was delighted to have found a new site.

An owling expedition with Titus, three days later, on a rather dull day resulted in the unexpectedly high number of eight Little Owl sightings, but no images worth bothering with. However, one week later and again out with Titus, on 4th December I managed the same number of owl sightings and fared a little better with the photography, although it was still very dull weather. I was delighted to get an image with both owls showing (see 2nd image, below). These were taken with my new Sigma 50-500 OS lens (my Christmas present from my wife!). It's looking like it was a good choice! 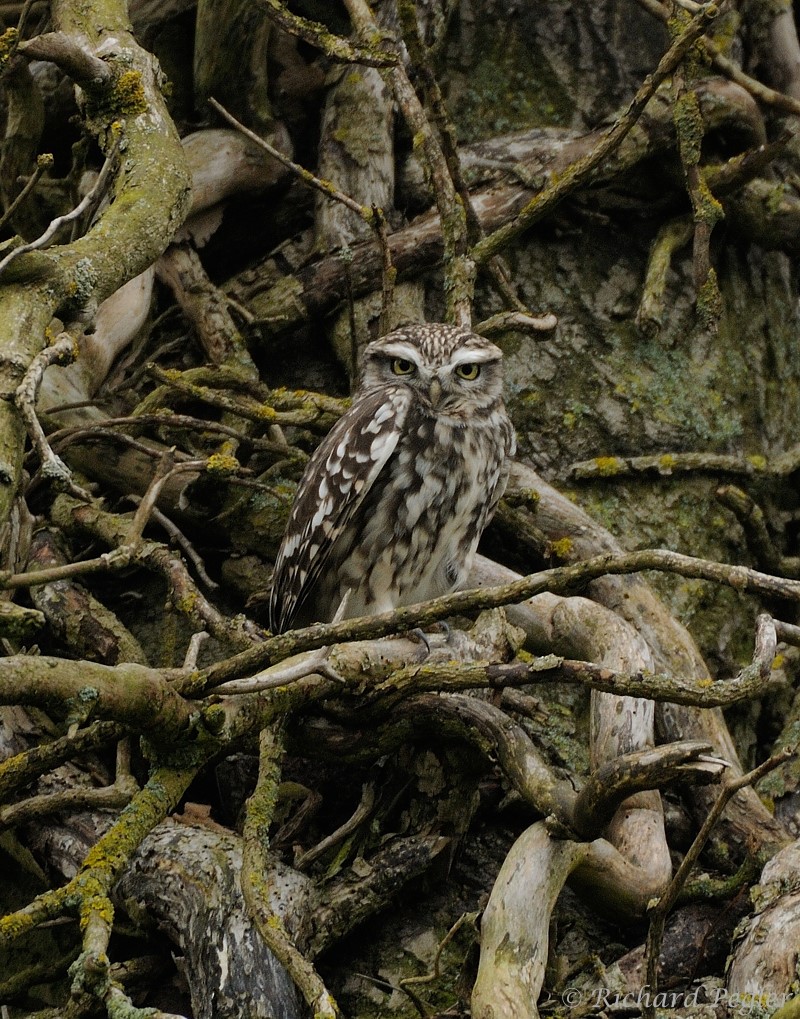 At site No.34 we found an owl outside the nest cavity. I don't think I'd have managed this next image with the old lens in the very dull conditions.

The following day I had to pay a visit to the farmer on my local patch, and then went off for a walk around the farm. Both birds were out at my LO Site No.02, but only one was reasonably well presented, although it was horribly dull weather again.

My walk took me to LO Site No.11, where its been a few months since I've seen an owl there, but there was no immediate evidence of continued occupancy.

I continued on to site No.30, where I'd last seen owls in May. This site is very difficult to get to in the summer because, although it can be approached from two directions, both directions involve passing through two adjacent fields which usually contain cattle. This means that if you find yourself being stampeded towards by a herd of cattle (as has happened to me on this farm several times!) and manage to escape into the next field by diving through the electrified fence, you're likely to find that you've jumped out of the frying pan into the fire! My last sighting had been from a gate just over 200 metres away and, frustratingly, this was the only time I'd ever seen two owls here - surrounded by a herd of killer cattle!

Now, however, the cattle had all been taken in under cover for the winter (these fields get extremely wet), so I could approach with the only danger being that of drowning! A traverse past the site didn't yield any sightings, but then my approach had been from the windward side, and it was cold and windy! I did a stealthy traverse of the leeward side, turned with camera to my eye, and there was a Little Owl tucked well back in a hole in the tree trunk.

That night I was giving a talk on Little Owls and used this site to explain some of the difficulties that I encounter when out owling, and told them that I'd been delighted to see an owl here that very morning for the first time in 6 months. You can imagine my delight when I got round to looking at my photos the next day, and discovered that there were two owls in each of my photos.

From here I went on to inspect my LO Site No.45. This is where I'd heard owls on several occasions over the years, but spotted one for the first time in January this year, then again in February. The next time I saw an owl here was in May, in a cavity in a tree some 150 metres from the presumed nest tree. I put this down as being an owl roosting away from home. I was, therefore, delighted to find an owl back in this second tree on this day. It was well covered by twigs (the first image, below, shows the problem), so this is the best that I could manage. 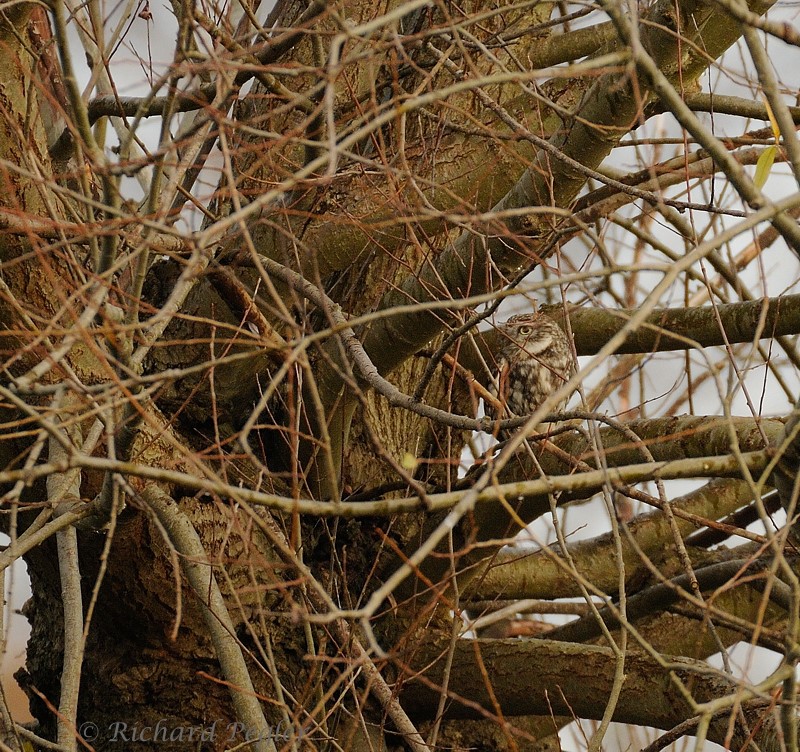 I then went to inspect, at a distance through a hedge, the tree in which I'd first seen an owl here - and saw through the hedge that there was an owl sitting in what I believe to be the nest cavity. I now have to find out whether I'm seeing single owls at two different sites or a pair, with one tending to roost away from home.

I didn't get any photos here because of the intervening hedge and to approach from a different angle would have meant a diversion of around 700 metres to end up 5 metres away from where I was, but on the other side of the hedge! I didn't bother.

I'm not sure if I've ever before seen three pairs of owls on my local patch in one visit, which lasted less than an hour and a half in this case!

Yesterday was a cold and very windy day, but Titus and I still went out for a short afternoon, and I was quite surprised to find three owls, one of which is shown below. Fortunately the sun was shining and the owl was, unusually, sitting out in a relatively exposed place.

I hope that you're not having any last-minute panics over arrangements for Christmas - I think (for a change!) I'm in relatively good shape in this respect!

Thank you for dropping by.
Posted by Richard Pegler at 18:41