I am still in 'catch-up' mode and, with this post, I offer an account of some of my sightings in the garden during April of this year. Some of the winter visitors were still with us at the start of the month, but things soon started to change during the later part. Herewith, a few of the highlights.

The Bramblings were still visiting, and on this day I photographed a male. This one was well into its breeding plumage.

Occasionally we get visits from Long-tailed Tits and are always delighted. Often it's small groups but sometimes, as on this occasion, we just have a single bird. When we do, we tend to refer to it as 'pathfinder' because, after such sightings, it is quite common for a group to arrive within an hour or two. Not on this occasion, however, as far as our observations were concerned. This one was outside my study window. It seemed to be collecting nesting material.

The only remarkable thing this day was the small flock of 10 Goldfinch that visited. Goldfinch are daily visitors, but not usually in such numbers. This event was not, however, recorded on camera.

Magpie is a relatively reliable visitor these days, but I rarely photograph one. This day was an exception.

We had three Brambling visit this day. I did manage to get a record shot with all three in!

Wanting to make the most of the continuing Brambling visits, I took this shot of a female of the species.

A pair of Stock Dove have been regular visitors for a long while now, and I find them most agreeable.Saturday, 9th April

Excitement arrived this day in the form of a Lesser Redpoll. In recent years, garden sightings of this species have been very thin on the ground. Unfortunately, I only managed a 'feeder shot'

It was a fine sunny day and the Lesser Redpoll was back, but I didn't manage any photographic improvements. I was pleased, however, to get a few shots of an Orange-tip butterfly. The orange wing-tips denote this as a male - absent in the female of the species.

The moth trap went out this night. It only resulted in 13 moths of 10 species. A couple of the more attractive ones are shown below. The Waved Umber was not in the trap, but on the wall next to the trap, and I nearly missed seeing it as it blended in with the wall so well. I have added a second image of it to show it more clearly. 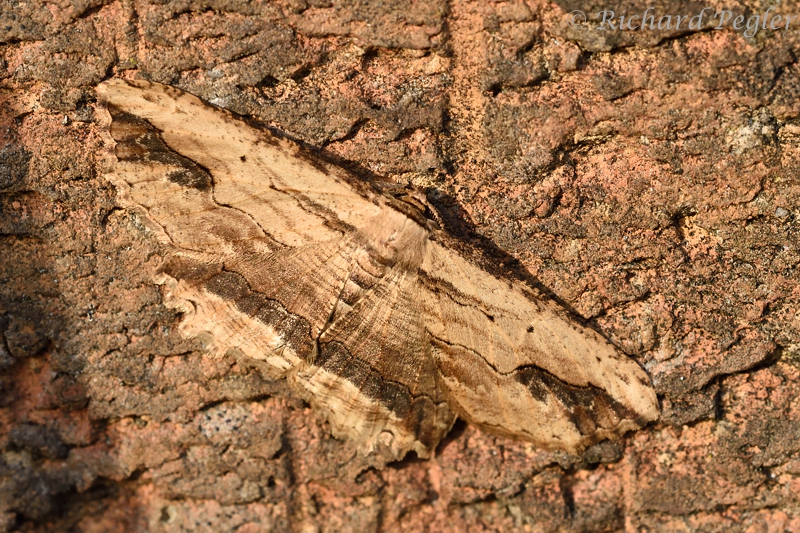 The Purple Thorn shot was taken when the moth flew up from the piece of green card that I was trying to photograph it on, and landed on the glass of the conservatory window - I think it makes for a rather nice shot!?

A common, and not very colourful, butterfly, but I think that this was probably my first of this species for the year (I don't keep butterfly records).

No particular highlights this day other than unphotographed Holy Blue and Orange-tip butterflies in the garden, but I did take some photos of a Jackdaw that has become a daily visitor.

And a Jackdaw again the following day - a very smart-looking bird.

On this day, I did manage to photograph a visiting Holly Blue butterfly. This one, with the extensive black on the outer edges of the forewings, was a female. 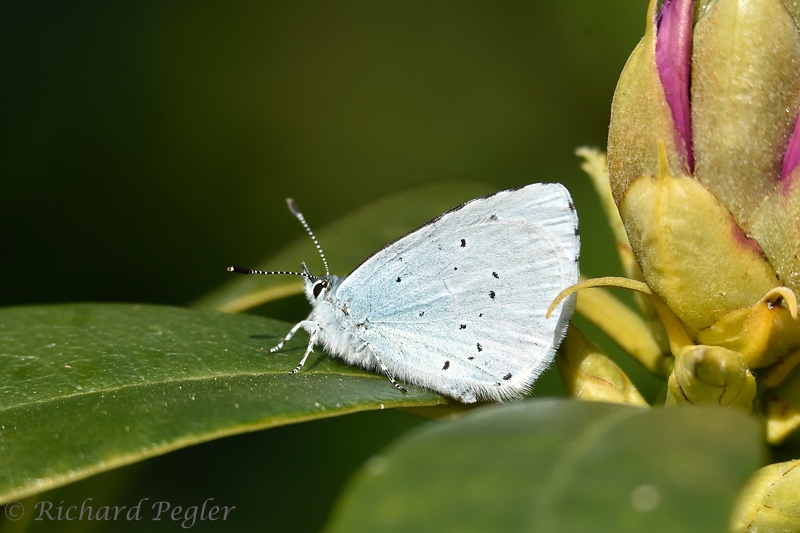 I'd been neglecting the garden observations for much of the last couple of weeks in April, partly because I was getting out more often and partly because I was rather busy in the garden with things like pruning and fence-painting. On this day, however, I did sucessfully rush out into the garden to photograph a visiting Orange-tip. This one was, again, a male. This photo allows you to just detect the wonderful pattern on the underside of the wings, showing through the slightly translucent rear wings.

That night the moth trap went out, and only attracted five moths of three species, none of which were remarkble from a rarity point of view but I do find the Early Grey to be quite appealing, and the Brindled Beauty to be particularly attractive.

The month ended on a high when we had our first visit from a Fox for a very long time. I'm not very knowledgeable on Foxes, but it seems to me that this may be a female that has recently given birth.

Thus ends my account of some of our garden highlights for April.

At this point in time, I'm not sure when my next blog post will be, or what subject matter it might feature. There's quite a lot going on at the moment - most of it good!

In the meantime, take good care of yourselves and Nature - - - Richard