I feel I should start by apologising to all for my late responses to comments and tardy visits to your blogs. Lindsay and I have been away for eleven days, visiting the Outer Hebrides. Unfortunately Lindsay started showing Covid symtoms on the way home and tested positive. It might, therefore, mean that output and visits from me might be further interrupted, particularly as the odds are that I'll catch it too!

Since becoming greatly interested in dragonflies, I had yearned for a garden pond. There was, however, one major problem to overcome, and that was Lindsay's phobia of frogs. Even without a pond, frogs and toads were occasionally turning up in the garden and causing problems for Lindsay.

Three years ago, I stumbled across a possible  solution, and that was a UK company (www.gardenparadise.net) that were offering self-assembly wooden-sided rectangular ponds that could either be sunk into the ground or placed on a flat surface, so that the height of  the walls would even be beyond the ability of an olympic high-jump champion frog. And just to add to the impenetrability, there was an overhanging lip to the the wooden capping.

Lindsay, very generously, agreed to me having a small one of these for a birthday present. There was quite a long lead time, but it just arrived in time for my birthday in June, 2020. It was quickly erected and filled with water. Four pond plants were ordered - three ornamental and one oxygenating - and installed at the appropriate height with regard to water level.

Although the pond was described as 1m x 1m x 429mm the actual water volume is about 0.8m x 0.8m x 0.38m. It is, therefore, rather small, and I had no confidence that it would attract wildlife.

In its first year, it did seem to attract a number of water beetles. More notable, however, was finding the Rat-tailed Maggot larva of a Helophilus pendulus hoverfly, and the first visit by a damselfly - a male Large Red Damselfly - in mid July.

In 2021 there seemed to be little activity at the pond and no damsels or dragons were noted visiting the pond. However, we did return from holiday at the end of May to frustratingly find three exuviae in the 'fibre optic plant' in the pond . In spite of having a field guide which covers damselfly exuviae, I am not sufficiently skilled to positively ID these. They all looked to be similar and I suspect that, given the timing of the emergence, they were Large Red Damselfly, but the caudal lamellae do not look quite right to my mind. I didn't manage very good photos.
Saturday, 7th May
We now come to 2022, and I had regularly been peering into the pond and thinking that other than the plants, which this year were not behaving as vigorously as they had in the previous year, there was no sign of life whatsoever. I was, therefore, surprised when, during breakfast on this day, Lindsay exclaimed "there's something climbing out of the pond".
Given that I'd been making frequent visits to local ponds, hoping to find my first damsel or dragon of the year, it was doubly exciting that my first was from my own pond!
Sure enough, there was a Large Red Damselfly nymph. Sadly, this one was doomed to be a failure. It had emerged on the side of the pond, rather than on a plant stem and failed to disentangle its wings from its abdomen. You may be able to see in the image below that there seems to be a blob of liquid holding the wings wrapped round the abdomen.
When the second one, another female, emerged that morning it was more successful. 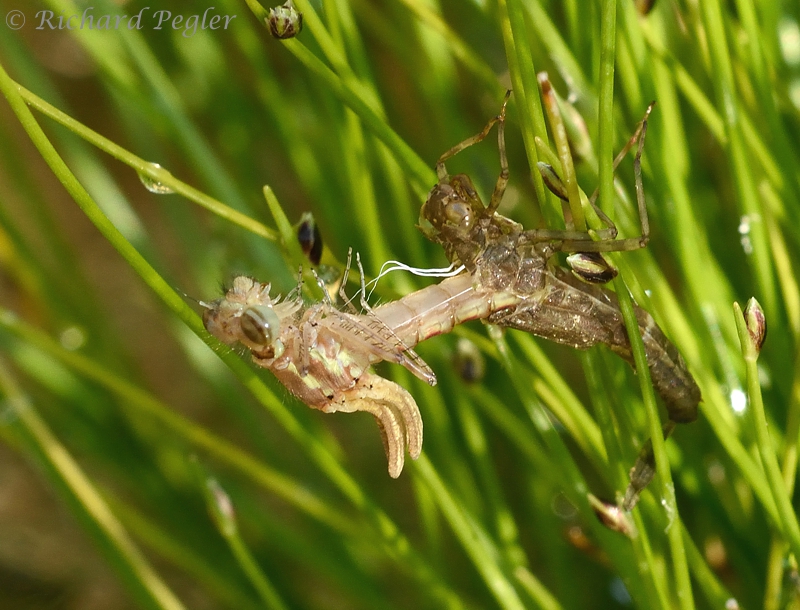 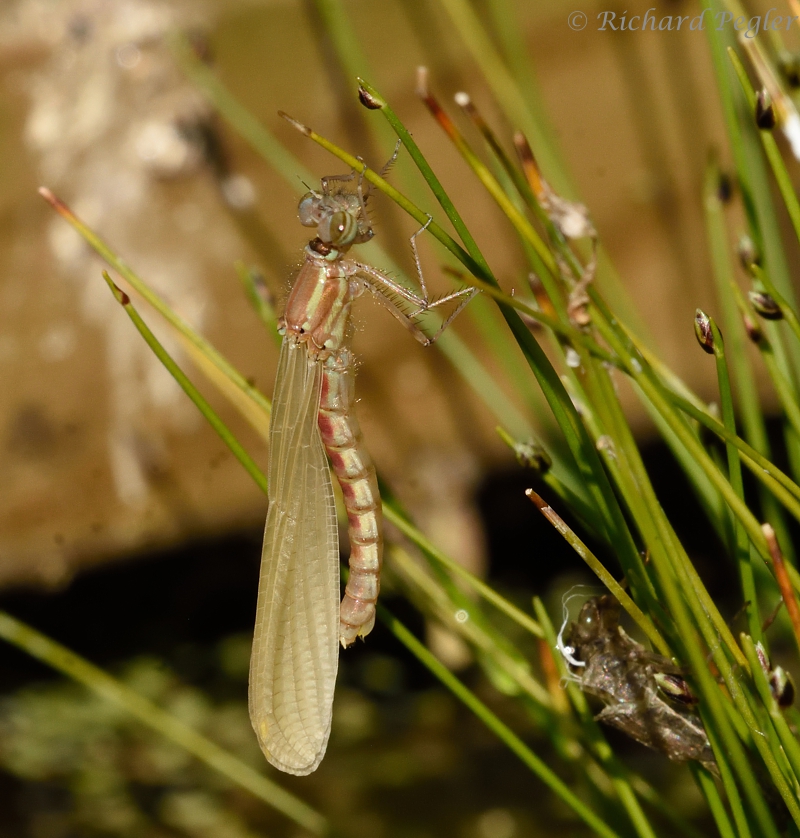 The third one, again a female, emerged, and flew quite some time before the second one did. 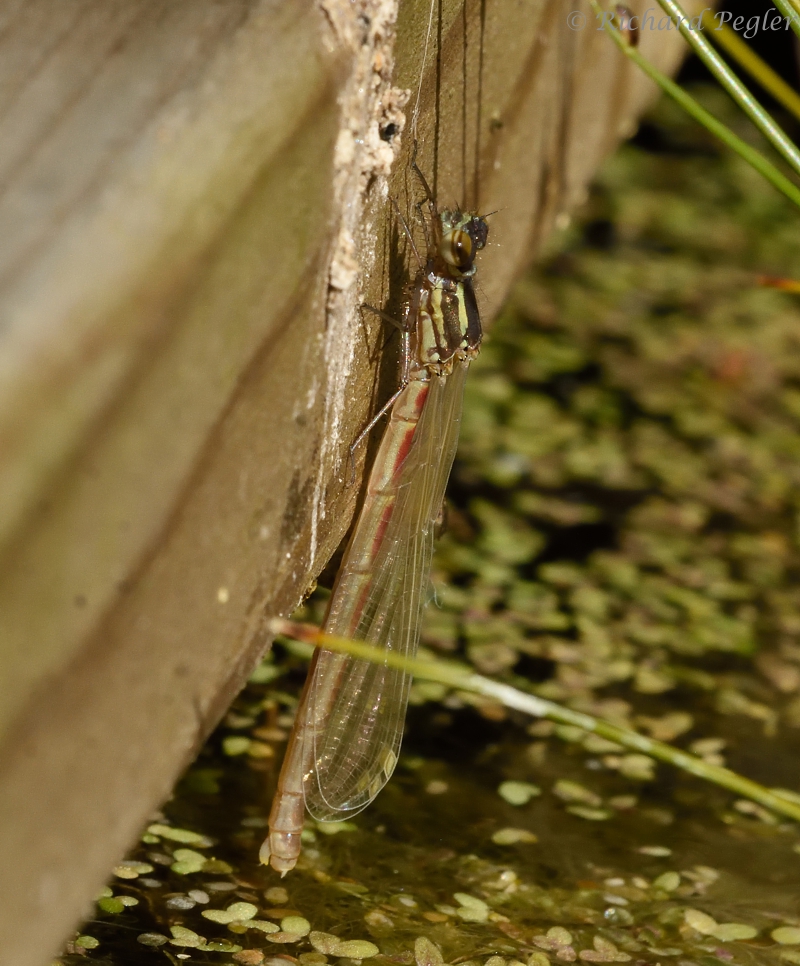 I observed two more Large Red Damselflies emerge that day and there may have been more that I missed. All but that first one emerged successfully. Three were female, one male, and the gender of the fifth one was not determined.
Sunday, 8th May
I observed five more Large Red Damselflies emerge this day and again we had one of them fail. The problem seemed to be that the nymphs were tending to emerge onto the sides of the pond for which the capping overhangs the inside and outside of the pond. This means that it is difficult for the nymphs to place themselves into a vertical position, split backwards out of their casing, and then straighten up and grasp above the exuvia in order to get themselves into a suitable position to dry out and pump up their wings and abdomen. This next one was lucky.
Monday, 9th May
Just four damselflies (yes, all Large Red!) were seen to emerge this day.
Tuesday, 10th May
Another four emerged this day. We were now wondering where and what the food source had been to sustain this number of damselfly nymphs, which are known for their voracious appetites!
Wednesday, 11th May
This was a cold wet day, and if there were any emergences, we didn't see them.
Thursday, 12th May
As if to make up for the previous day, we had an astounding ten damselflies emerge, two of which failed. This nymph was working its way round the outside edge of the pond, trying to find a suitable place to emerge. It has a Rowan petal attached to its caudal lamellae
Friday, 13th May
Lindsay and I were out for a chunk of the day, but we still witnessed the emergence of five damselflies, one of which failed.
Saturday, 14th May
I was out for the day from 09.30, but still managed to check five emergences, two of which failed, before I departed.
Sunday, 15th May
This day we had just four emergences, two of which failed.
Monday, 16th May
Numbers were up again this day, with seven emergences, three of which failed. In this shot, one of the nymphs is seen working its way around the top of the pond, trying to find somewhere to emerge - note, it has lost its caudal lamellae. It later moved to the side of the top and emerged successfully.
Tuesday, 17th May
Just when we thought that all this must be drawing to a close, things got really silly with a tally for the day of twelve emergences, two of which failed.
Wednesday, 18th May
It was a little quieter this day with just six emergences, all of which were successful.
Thursday, 19th May
We departed to go on holiday at around 10.00 in the morning. However, before we set off, three more Large Red Damselflies had successfully emerged, brining the total tally for the season to 70 emerged Large Red Damselfly including 15 failures.
Sunday, 29th May
By the time of our return there was no evidence visible to indicate if any further damselflies had emerged, but I suspect that they had
This all goes to prove that my earlier assessment that the pond was lifeless, couldn't be further from the truth. However, with that number of damselfly nymphs on the prowl, I suspect that there's not much else left in there, so the prospects of there also being enough food to support any dragonfly nymphs are slim. Time will tell!
I will now be working on processing the thousands of photos that I took whilst in the Outer Hebrides, and hope to be able to produce a blog post on this adventure in the not too distant future. However, as mentioned above, I might be hampered by events. In the meantime, please take good care of yourselves and Nature - - - Richard
Posted by Richard Pegler at 14:51