I recently realised that, with so many things happening in my life, it was a long while since I published a blog post featuring local and garden highlights. Apart from a report on a dragon hunt in July, my last offering on this subject featured events in April. This, then, will be my first step in bringing matters up-to-date, and feature some of my highlights from May. Being away for nearly half of the month, it might seem to be a bit thin!

A short visit to the two hides at Calke Park produced a few photo opportunities. The most exciting of these was the male Brambling. At this time, I was still being very cautious about Covid, as our trip to the Outer Hebrides was on the horizon, and so my time in the hides was curtailed by the arrival of other persons.

From Calke Park, my route home took me over the bridge at Staunton Harold Reservoir. I stopped just before the bridge to have a look around. A Grey Heron was skulking in the shadows and a Mute Swan was sitting on the most enormous swan's nest that I have ever seen!
Sunday, 8th May                  Our Garden
A highlight on this day was the arrival of a Brimstone butterfly in the garden. We don't see many of these although, by coincidence, I did see one in the garden just yesterday!
Wednesday, 11th May                 Packington
On this day, I went to check on my newest Little Owl site, and was extremely pleasantly surprised to find it much closer to a possible viewing point than on my previous sightings.
Sadly, a visit in July revealed that the tree that I'd previously always seen the owl in, and believed to be its nesting tree, had been greatly reduced with a chain-saw. The intervening hedge had grown much higher too, so that it was impossible to check out the situation with any degree of certainty, but I suspect that the owl will have gone.
Saturday, 14th May                     Ketton Quarry
On this day, I travelled a bit further afield to Ketton Quarry, which is one of my favourite locations for butterflies. It also tends to throw up a few day-flying moths.
My main targets were Green Hairstreak, plus Dingy and Grizzled Skippers. My timing seems to have been out, however, for all these species, although they would normally be in the peak of their season at this time. I only found one very worn Dingy Skipper and one rather uncooperative Grizzled Skipper to photograph. Not a single Green Hairstreak was seen in what has always been a 'dead cert' area in previous years.
A pair of Brimstone were busy on the ground.
As far as I can make out, this was the caterpillar of Dark Green Fritillary.
Common Blue butterflies were about, and always a delight to see. 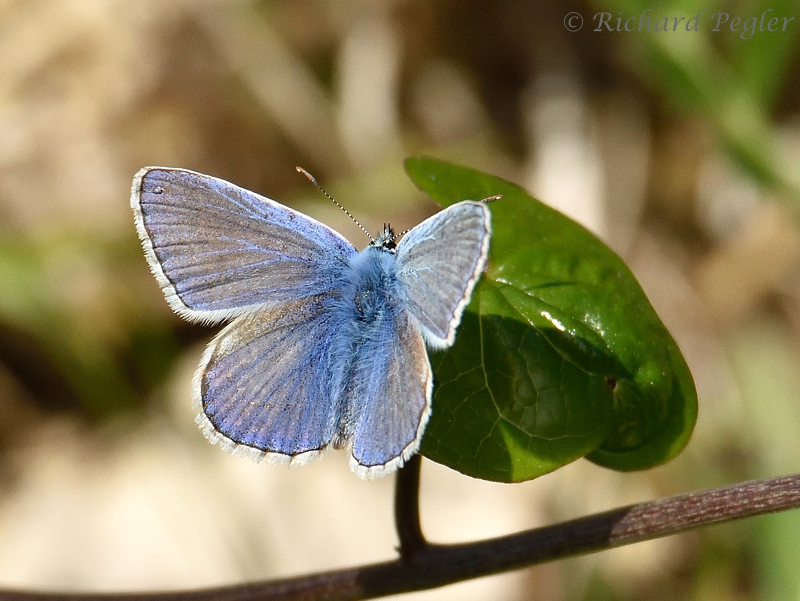 The female Common Blue can easily be confused with the less common Brown Argus. This is a Brown Argus, but I am not sure of its gender.
Small Heath butterflies were present too.
Two species of day-flying moth are a speciality of Ketton Quarry. Burnet Companion is classed as 'uncommon/under-recorded', and Common Heath (a very variable moth) is classed as 'rare' with only three known colonies in the county.
Burnet Companion looks orange in flight, due to its bright orange underside - a feature that one would probably never expect from the normal view of a settled one. 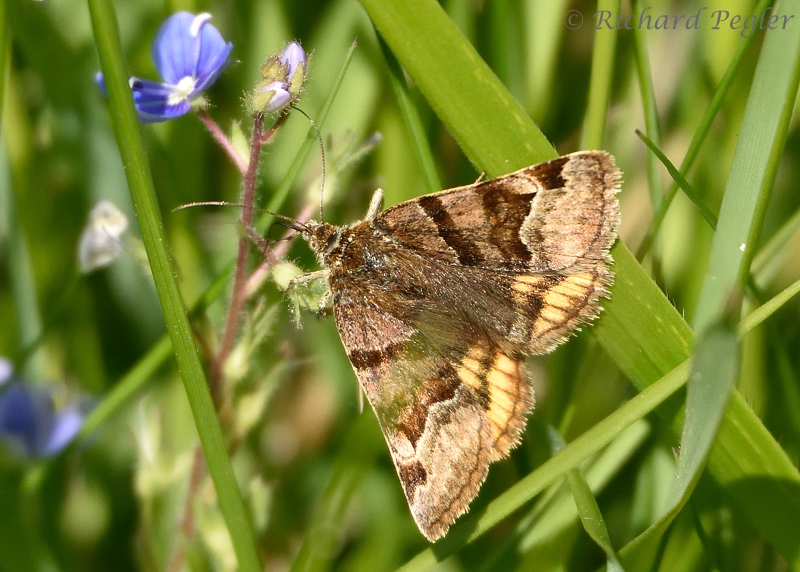 The common micro-moth, Pyrausta aurata, often referred to as 'mint moth' was there.
A caterpillar of the Lackey moth added a splash of gaudy colour to the scene!
I don't think that I have ever photographed a Woodlouse before. What fascinating creatures they are!
I have absolutely no idea as to the identity of this tiny beetle, but it looked exquisite! UPDATE:_ With thanks to 'Conehead 54' who ID'd the beetle as one of the Cryptocephalus species (and it being on Rough Hawkbit), I now think that the beetle is probably Cryptocephalus aureolus, as most of the few records that there are for the county are from Ketton Quarry!
It hadn't been the visit that I'd hoped for but it was, nonetheless extremely enjoyable.
Tuesday, 31st May                       Our Garden
We came back from the Outer Hebrides to find that we had a visitor in the garden in the form of a rather fine-looking racing pigeon. This pigeon was somewhat omnipresent and this gave me the opportunity to take photos of its leg adornments and trace its owner via the data on them. It's home was in Biggleswade, some 70 miles (110 km) away, and it had been released in The Channel Islands, approximately 240 miles (390 km) away. There had been a group of pigeon fanciers from Biggleswade competing with a group from Leicester and it seems that his bird had decided to travel with the birds from Leicester.
The owner requested that I did not feed his bird (a 2 year old female) in order that it would be tempted to return home, but there was no way I could withhold food from it without disenfranchising the other birds that visit our garden. Several days later it was still with us and, having seen it that morning, I was about to contact the owner around mid-day to update him when he phoned me to tell me that she'd just arrived home. He also asked if she'd been missing her tail when with us. Not being familiar with racing pigeons, I'd put the lack of obvious tail protrusion as a feature of the breed!
We also came home to find that a Fox had been visiting regularly in our absence, as had been captured on the cameras that I had left out. This had been taking advantage of the peanuts and sunflower hearts that I'd left on a large suspended tray, and which was within the reach of the Fox.
This brings me to the end of my catchup on May, 2022. I suspect that my next post will feature June events, either from the garden or from my excursions, but not both, in order to keep the size of the post to a more acceptable level.
In the meantime, please take good care of yourselves and Nature - thank you for dropping by - - - Richard
Posted by Richard Pegler at 13:50