I didn't get out into the countryside much in June this year - partly because of catching Covid near the start of the month. Most of the local excursions that I did make were specifically to look for damselflies and dragonflies. Here is a brief account of where I did get to.

Lindsay was already suffering from Covid and so I did not want to venture out for long. As I'd seen Hairy Dragonfly (Brachytron pratense) at this location at this time of year in both 2020 and 2021, and the County Recorder had considered these to be notable records for this part of the county, I thought maybe I should have a look to see if I could find one this year.

On arrival, it was disappointing to see the extent of the murky rusty-brown water from the mining outflow. I only saw two dragonflies that were so distant that I could not postively ID them but were probably male Emperors. There were a few damselflies present, including a male Azure Damselfly which spent time waving its abdomen about. 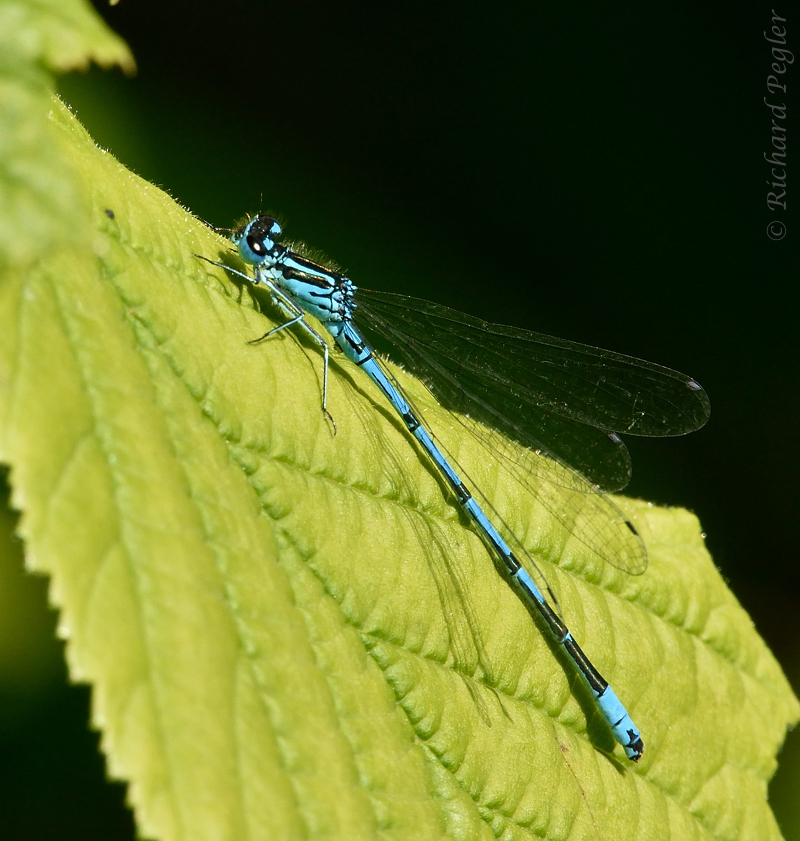 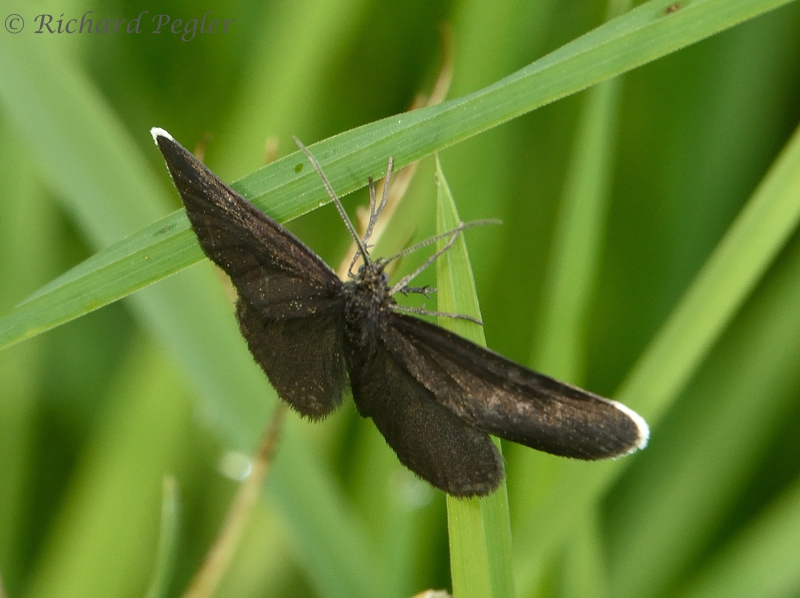 I have no idea of the ID of this spider that was crossing the boardwalk. Initially I thought it had a large round pale abdomen, but now believe it is a female transporting an egg-sack. Please let me know if I am wrong!
The next day, feeling a little off-colour, I tested postive for Covid, and this kept me 'housebound' for a while.
Tuesday, 14th June                    Saltersford Valley
On this day, feeling much better, I had my first negative Covid test, and it was time to break loose. I should have been returning from a three day stay in Norfolk this day, but that was cancelled because of Covid. For my first outing I felt it wise to stay close to home as I was not sure how robust I might be. A return to Saltersford Valley seemed to be the best option.
On this visit, I still didn't find any dragonflies close enough to identify. In fact, even the damselfies were in short supply. Here are a few.
An Azure Damselfly was up to its abdomen-waving tricks again - I'm not sure why I'm suddenly starting to notice this behaviour!
I was pleased to see the swans had produced five healthy-looking young.
If you didn't know, I'm not sure that you would ever guess that these were Moorhen chicks. I was reminded of my old pal, John Truman, once remarking, on the appearance of some Moorhen chicks,  that "you'd have to be the mother, to love those" - however, I think that they're rather cute!
There were many Speckled Wood butterflies around, but the only butterfly I photographed was a Meadow Brown. This one was photo-bombed by a Swollen-thighed Beetle which flew in!
I have to confess that I came away from this visit thinking that there was something wrong at this site, as a once productive site seemed to have become a shadow of its former self.
Wednesday, 15th June                   Heather Lake
Determined to find dragonflies, I headed off to another favourite location near my home. This has also been a very productive site for dragonflies and damselflies.
Yet another disappointment awaited me as I found that the vegetation round the lake had grown to an unprecedented height and density and it was difficult to get a view of what might be around. Passage along the east side of the lake was relatively easy, but the west side was all but impassable with tall vegatation, including brambles, across the pathway.
At first, I was not seeing any odonata at all and started taking photos of other wildlife. I think that this spider is one of the Tetragnatha species, possiby Tetragnatha extensa.
They may be our most common duck, but a 'nursery' of Mallards will always gladen my heart.
I'd never seen orchids beside the lake here, so was quite surprised to spot isolated plants in three water's edge locations. I couldn't get close enough to see the leaves, and do not know what species these might have been.
Speckled Wood butterflies are almost a 'given' at this location at the right time of year, and they do seem to have a long flight season.
I was at the south end of the lake before I found any photographable odonata. Common Blue Damselfly were busy working on the next generation. 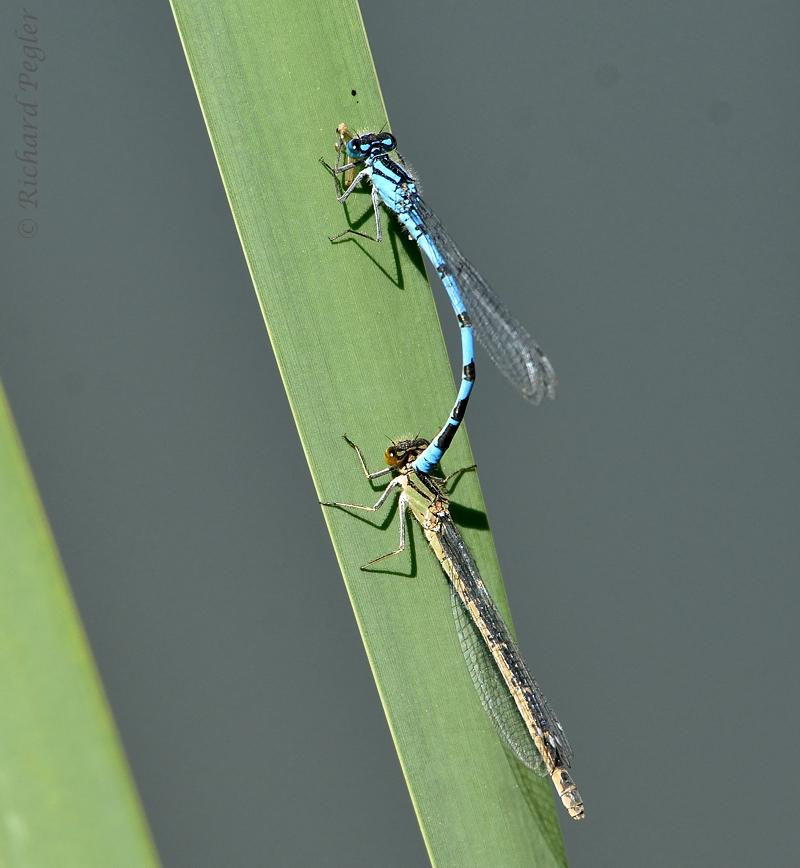 What little dragonfly activity there was, was round on the barely accessible west side of the lake and, as this was a morning visit, the light was against me. The best that I could manage were some rather dodgy shots of Four-spotted Chaser.
I was now starting to think that the odonata in this area were not having a good season.
Monday, 20th June                         Saltersford Valley Country Park
Undaunted by my previous disappointments at this site, I paid another visit, and found myself almost immediately uplifted by sighting a Southern Hawker - and it settled! 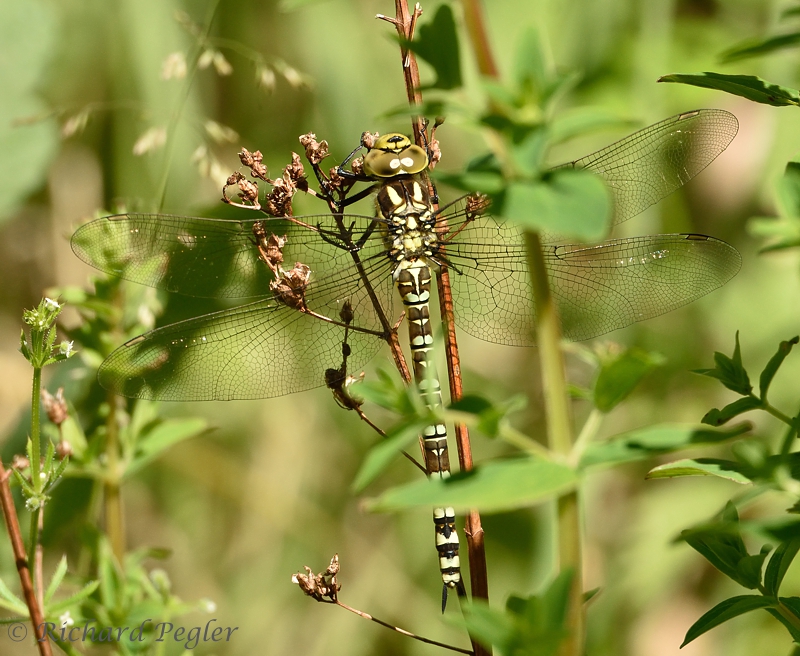 My next significant sighting had me puzzled for a long while until I did some research. I could not understand why all these flies were attracted to this particular part of this bramble. I considered that it might have been polluted with something but, for example, it was much too high off the ground for anything to have peed on! I subsequently found that these were Cluster Flies, and this is their normal behaviour!
The damselflies seen were common fare.
A Black-tailed Skimmer, was settling on a gravelled area, which was not helpful for photography.
I was pleased to get some better shots of Four-spotted Chaser. You may understand, from these images, why I think that Four-spotted Chaser deserves the epithet 'hairy dragonfly' more than does Hairy Dragonfly (Brachytron pratense). 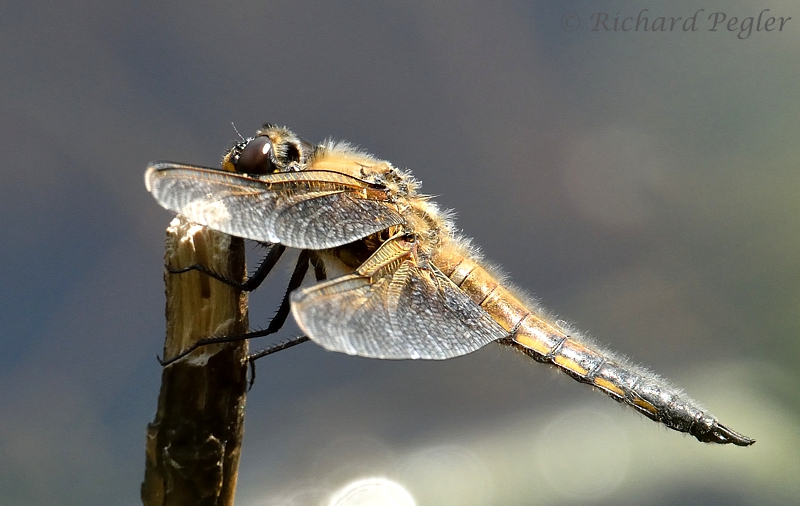 As I was about to leave, I saw some movement in the reeds and, after a while of waiting, the bird appeared. I believe this to be a Reed Warbler, but I'm not good on brown warblers!
At last, I'd had a relatively satisfying dragon hunt!
Wednesday, 22nd June
On this day, I'd arranged to meet my brother at Rutland Water. We'd not seen each other since before Christmas, and he wanted to hand over a golden wedding anniversary present that he and my sister-in-law had very kindly bought Lindsay and I. We didn't venture beyond the car park at Rutland Water, and little was seen except a Red Kite. However, I did see a Little Owl on my way there, and it was in exactly the same place on this branch on my way back, four and a half hours later!
The next day, we were off to Portland, Dorset, to celebrate our anniversary, which I have already reported on, so this brings me to the end of my account of my local excursions in June. At this point in time, I intend my next post to be on my garden observations for June.
In the meantime, please take good care of yourselves and Nature. Thank you for dropping by - - - Richard
Posted by Richard Pegler at 12:05