With me being confined to barracks with Covid for the first part of June, I was pleased to have our garden to keep me entertained. Here are some of my garden observations.

Whilst performing my daily  inspection of the garden, I came upon this caterpillar on one of the Buddleia bushes. I believe that this is my first ever garden record of Mullein moth. This ID is reinforced by it being on one of that species' favourite food plants.

We are lucky enough to have Bullfinch visit our garden relatively frequently, although I don't recall ever having had more than four at any one time. However, these usually go directly to the very unphotogenic feeding trays, and I don't think I'd ever managed a photo with more than one in, away from that scenario - until this day. The weather was not good, the light was awful and I was a long way away, but here's one 'for the record'.

We had just finished lunch in the conservatory on a dull damp day when I noticed something on the edge of the mini-pond. I was a little surprised to find it was a newly emerged Large Red Damselfly. We had observed seventy of these emerge from the pond between 7th and 19th May, but none since, so to have just this one emerge eighteen days later in poor weather conditions caught me off-guard. In the shots that follow you can see that wings and abdomen have yet to be 'pumped up' in the first image. In the second image, the wings are almost at full size, In the third image, the abdomen and wings are fully developed and the damselfly is almost ready for its maiden flight. 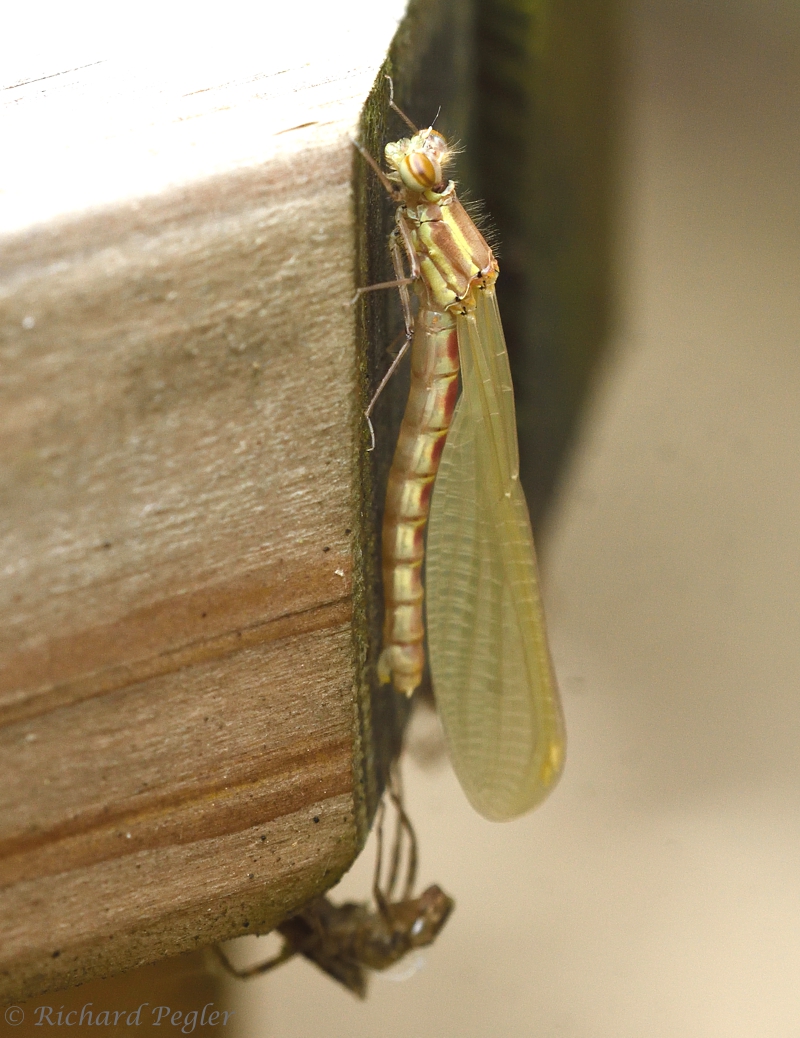 I'm pleased to report that all went well and I witnessed it fly away.

While watching the action, I noticed this ladybird nymph on the edge of the mini-pond. I have no idea of what species it was - I understand that ladybird nymphs are difficult to ID.

I also found this caterpillar, which I believe to be that of a Large White butterfly.Tuesday, 7th June

Of note this day was the arrival of a teneral male Common Blue Damselfly. Given its state of development, I suspect that it had recently emerged from next door's pond, as there was no evidence of it having emerged from our own pond.

Whilst in the garden, I also noticed this hoverfly on some Garlic Mustard.Thursday, 9th June

We are lucky enough to have Hedgehogs visiting on a nightly basis. Recently, we have been having up to four of them on some nights. When they meet up, the result can be a little unpredicatable, seemingly depending on the sex and age of the hogs involved.

The cameras went out in the evening of 8th June, and caught this meeting in the early hours of the following day.

I was delighted to be able to photograph a Common Blue butterfly in the garden. We do get the occasional one appear, but they tend to pass through without stopping. This one decided that a viola was attractive.

A Hedgehog in daylight is always a source of worry as it usually means a sick hog. The regular appearance of one in  the late evening before dark and early morning after dawn concerned me at first but, having kept a wary eye open in case it appeared to be in trouble, I came to the conclusion that it was possibly a female that needed extra nourishment as it was feeding young. This theory was given more credibility when we started to see two young hogs appearing at the end of July.

I got really excited on this day when I saw a Large Red Damselfly land on a small lily pad in the mini pond. It then moved position and appeared to be ovipositing. However, after it had departed, I could see no evidence of this, and references state that the female of this species oviposits into submerged vegetation, and so something else might have been happening. I didn't want to stay and observe too closely, for fear of disturbing this event! 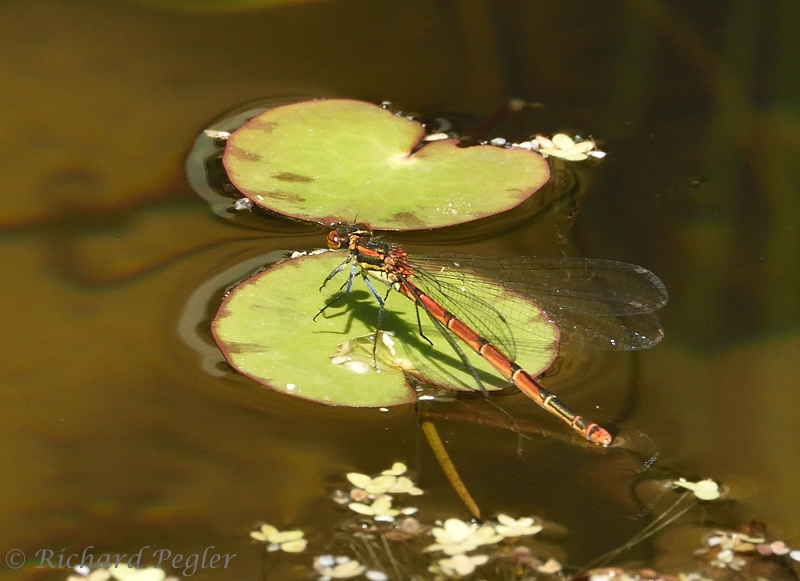 Garden observations for the rest of the month mainly involved Hedgehogs, so I bring this blog post to a close. My next post will probably be in around a week's time, and see me catching up with July events.

In the meantime, please take good care of yourselves and Nature. Thank you for dropping by - - - Richard