Readers of my blog might remember that my most frequently visited and reported-on Little Owl site is my Site No.02 on my local patch, where one of the owls fell victim to a Sparrowhawk in May, 2010. Since then I've kept a pretty close eye on the remaining owl (believed to be female). On Thursday, as my wife was out for lunch, I decided to make myself up a picnic and eat it whilst parked opposite the barn where this owl lives. I arrived to find that the owl was out on the broken roof of the barn. Hang on - she looks a bit pale!! Flipping heck!! - it's a juvenile!!!!!

It's a mystery to me what a juvenile was doing here - I'll give my theories at the end of this posting. However, I needed to record this amazing situation. I sat eating my lunch for a while, and the juv didn't move. I slowly removed myself from the car and crossed the stile to the footpath that runs by the barn - the owlet hopped up to the end wall of the barn and watched me by peeping over the wall.

It was time to set up the hide, roughly halving the distance between my car and the owlet. Whilst I did this I was studiously watched by the owlet. There was absolute stalemate for an hour, with neither of us moving, then an adult was glimpsed entering the barn by a rear entrance, and shortly after that the juvenile disappeared back into the barn.

After about 40 minutes, an adult bird left by the rear entrance, and a few minutes later a juvenile arrived at the hole in the barn roof. I can't be sure, but I think that this may have been a different juv to the first one seen.

After a while the owlet hopped up to the apex of the roof.

After about 20 minutes another juvenile appeared in the hole in the roof. Was this a second or third juv? 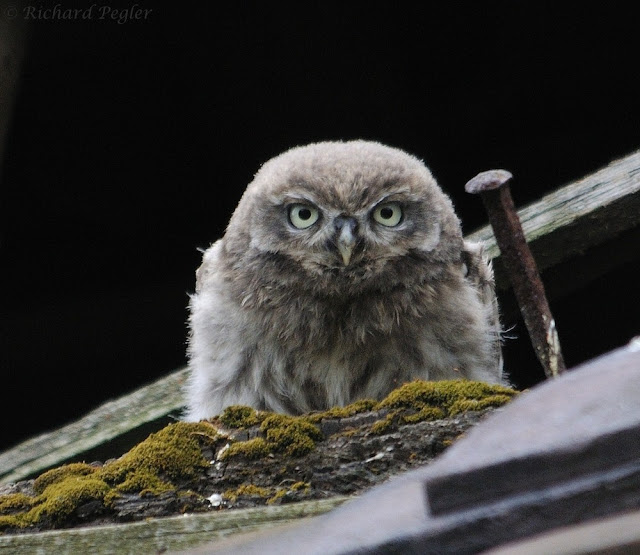 I now had two juveniles in view.

It was not long before the lower owlet started its hissing calling to an unseen adult bird behind me. This resulted in return calls from the adult bird. I noticed that, when the owlet started its hiss, it closed its eyes, and then opened them again as the hiss tailed off (presumably to see if it had got any reaction). This is shown in the two images below. 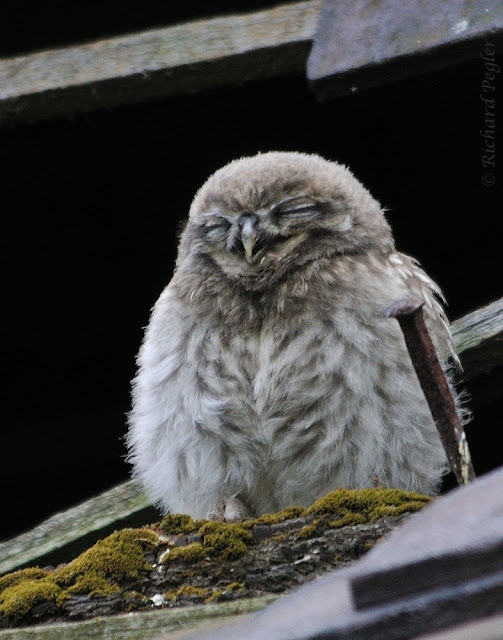 The calls from the adult became more insistent as the frequency of calls from the juvenile increased. Suddenly the lower juv took off and settled on the nearby chimney stack. I totally missed this photographically. I also missed the second owlet going to join its sibling - but only just!


Both birds stayed on the chimney stack for a while before, apparently, flying off to join the parent. 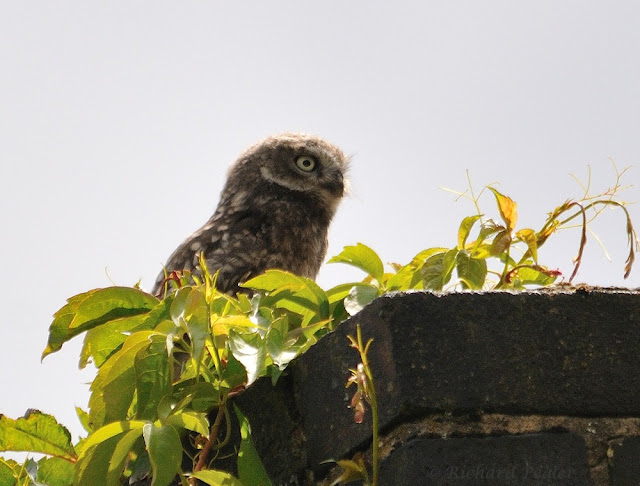 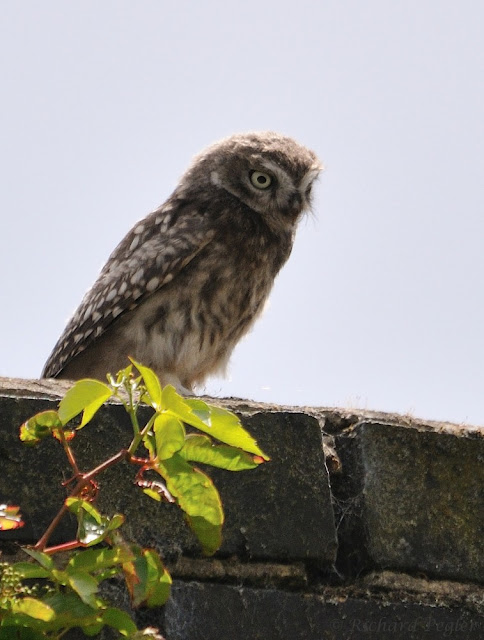 I stayed in the hide for another 20 minutes in case there were further developments but, as things had gone quiet, I then decided to leave without fuss - not attempting to re-locate the birds as I'm sure that they'd had enough disturbance for the day.

So, what are my theories about what had happened here. It was 27th May, 2010 when I found the remains of a Little Owl beside the barn at this site. Since then I have made many visits to this site, noting a single bird present on 44 occasions. There was one occasion in July, 2010, when I spotted two birds together on the chimney stack. The farmer also saw two birds together here at about that time - I assumed it was a visiting bird from my Site No.12 (only about 400 metres away). Since then, however, only one bird has been seen - or so I thought! It is possible that these juveniles were visiting from Site No.12 - when I went there after this session, I found that the farmer was using a pigeon scarer set up just 20 metres from the nest site (!), and no birds were to be seen. However, the juveniles seemed very 'at home' at Site No.02 and it is more likely that, by strange coincidence there had been two (very similar looking) birds at Site No.02 for a long while and I was only seeing one at a time. If there were two birds all the time it would explain why sometimes the bird seemed very confiding and at other times very nervous.

So where did this second bird come from? Well, it's possible that the remains found last year were not of one of the birds from this site, but of a visiting bird - the two birds from my Site No.11 (only about 600 metres away) disappeared at this time. However, I think that it's more likely that the remaining bird found another mate. It will remain one of life's mysteries, but I do feel a little daft at missing what was going on at my local patch - until this Thursday!
Posted by Richard Pegler at 14:38