Although they are supposed to be UK's most numerous owl species, it's a very rare day when I see a Tawny Owl. This, I guess, is due to them being, primarily, nocturnal. This also resulted in this being the only UK owl species for which I have not had an image, other than one that is barely recognisable. Therefore, when last week I had a call from the partner of one of my farmers to say that she'd seen a Tawny Owl on a branch beside a road in daylight a few weeks ago, I was somewhat interested! Yesterday I'd had an unproductive afternoon owling (only one Little Owl seen - and then at a great distance) so decided to check out this location, near Sibson, with a view to going out there later in the evening. When I arrived, just before 4 p.m., I was not too hopeful of being able to spot an owl here, whatever time of day, as the woodland beside the road was dense. I was checking things out when I heard a distant Tawny call! I responded as best I could, and that was the start of a conversation! Next thing I knew, the owl was in a tree at the edge of the wood just over the road from me. 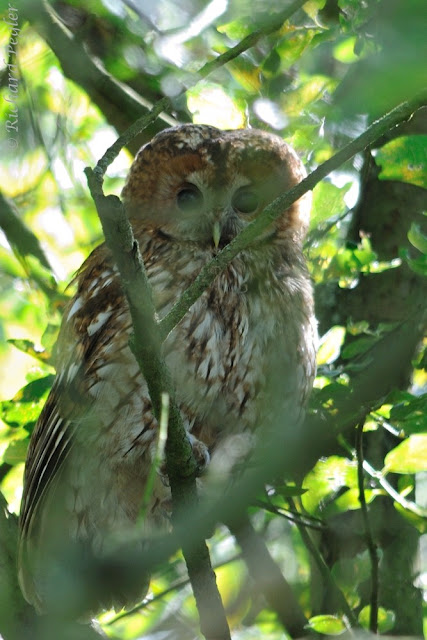 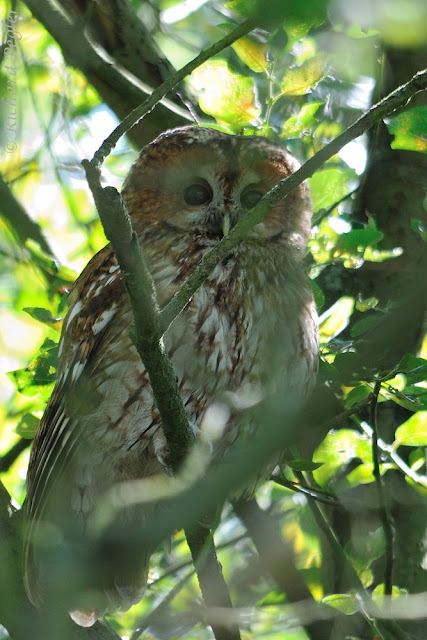 The owl kept fairly well covered, but I did manage a few shots before it moved to a closer, but even more impossible location for photography. Next thing that I knew it was on a branch in full view right in front of me, through the windscreen of my car. Now the windscreen of my Smart is impossible to shoot through, or even use bins through. By the time I'd hung out of the window far enough it had gone - a great shot missed! I sat for a while longer, listening to the owl calling in the distance, but as I'd planned an evening out owling, and told my wife I'd be home for tea at 5.00, I set off back home. Thank you, Diane, for the tip (Diane also tipped me off about the Little Owl site near Twycross (my Site No.17) which has been so productive for me).
That evening I visited another potential owl site where the farmer told me a week or so ago that  he has seen Barn Owl and Little Owl on an occasional basis. I had a fruitless evening, with the only excitement being seeing more Green Woodpecker than I usually see in a season! However, as it got to dusk, I was tempted by the dense woodland that was beside the very long drive up to the farm. I took my car back down the drive, opened the windows, and attempted to call up a Tawny. Within a few minutes I had a result - a Tawny in a tree ahead of me! I saw it fly in, but it landed behind dense foliage and in the bad light I couldn't spot it. As soon as I moved to try and see round the obstruction it was off again. Two Tawnies in one day - I don't usually see many more than this in a year!
Posted by Richard Pegler at 14:01