From having had a pretty pathetic May for observing Little Owls, I ended up having a record-breaking June (for my own observations, that is!). My previous best had been this April, when I'd had 22 sightings of Little Owl over 9 sites. My worst month since I started keeping records was October last year (when I lost the will to live as I was without my birding lens for my camera) when I saw just one Little Owl!! June, however, resulted in the sighting of 41 Little Owls over 12 sites - OK, so it's not a lot when compared to the efforts of my mentor, Paul Riddle, but I'm pretty pleased with it - and I made more 'positve' site visits, and achieved more sightings of Little Owl in the first half of 2011 than I did in the whole of 2010!
The end of the month brought a few more LO sightings, but the beginning of July is starting quite well too.

I spent three hours from 6.00 a.m. camped out in my hide at my Little Owl Site No.08 at Staunton Harold. I'd seen one of the owls as I arrived, but it proved to be elusive from a photographic point of view during my stay. However, another of the adults briefly showed inside the nest hole before diving back out of sight. This was not an easy image to capture. The sun was on the face of the nest hole and the bird was at least 18 inches (0.5 metres) back in the hole where the sun wasn't shining. It was an adult - no juveniles seen.

Later I moved to my LO Site No.17, near Twycross. As I arrived, an adult bird was peering round a gate post.

Another nearly three hours here didn't produce any further images although I saw two birds as I left. I next went to my Site No.18 near Oaks in Charnwood, and sat in my hide with my sandwiches. Only one adult was seen, and no images obtained. Last stop of the day was by my Site No.02, near Packington, where the solitary bird was on top of the pole beside the barn. It had not been a good day photographically, and the day was foreshortened by going to wish my son a happy birthday.

On my way to an evening duty on Osprey watch at Rutland Water, I stopped off at my LO Site No.21, near Hungarton. An hour or so in my hide produced no sightings of a bird, but as I got out of the hide one was spotted on a distant barn. However, on my way home from Rutland Water in the evening I stopped here again and spotted an owl about 300 metres away on a post. I decided to scan the usual tree - and there was a juvenile! This is one of my latest sites and I'd only ever seen a single bird here, so confirmation that there must have been a pair was a real bonus. I couldn't get closer than about 50 metres and needed 100th of a second at 1000 ISO to get the shot - so not a good image. It didn't help that I'm not yet used to the new lens - particularly its ability to change focal length under gravity - and I subsequently found that it had shifted from 500mm to 400mm!


Saturday 2nd July
I paid a quick afternoon visit to my local patch. At my LO Site No.20 an owl was out in full view on a bare branch. Before I could get my camera out, a lady on a bike stopped to chat - she was looking for a missing dog. Needless to say, the owl disappeared to a distant tree whilst we were talking.

Further on I paid a visit to the farm. After a chat with the farmer I had a look round. I can confidently say that, sadly, the Barn Owl is no longer in residence in the farmyard. However, looking in one barn where I often see Little Owl, I spotted an owl there high up in the roof - it was a juvenile (the first I've seen on my local patch!). It was very dark in there - the following images were handheld 40th second at 2000 ISO! 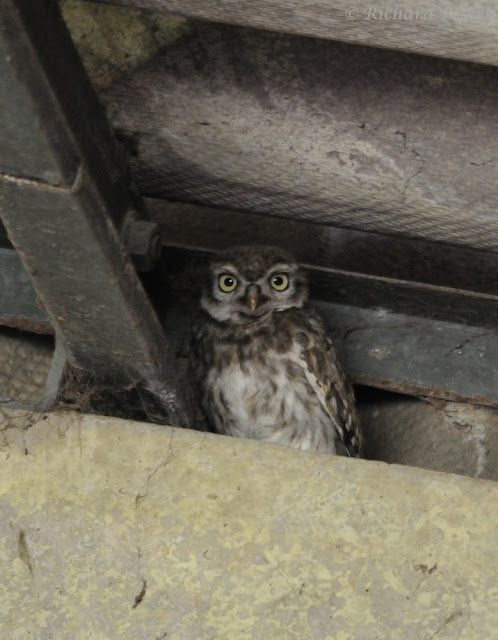 I remembered to re-adjust my camera settings (often a problem at my age!) as I left the owlet in the barn and went round the back to see if there was anything in the favoured roosting tree - an adult bird was there, watching me, mainly obscured by leaves. This bird seems to manage a distinctly startled look! I managed to get a few shots and was pleased to leave the bird undisturbed. 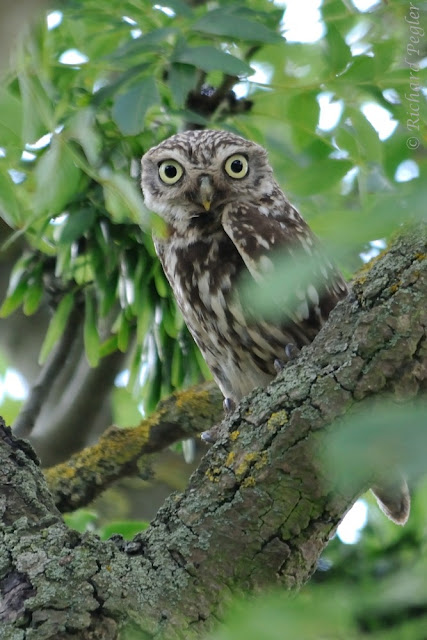 Down the road, the lone Little Owl at my Site No.02 popped up briefly onto the roof of the barn before disappearing to a distant tree. I took a walk to check out my nearby LO Site No.11, where the owls were evicted by bees just over a year ago - I keep hoping that they'll return, but still no sign of any re-occupation. However, on the way I spotted this Banded Demoiselle caught up in a spider's web. Unfortunately I could not get to it to rescue it.

Also, near this same point, a pair of juvenile Kestrels were experimenting with flight. I watched for a while whilst one made a pigs ear of landing in a tree top before finding its feet! 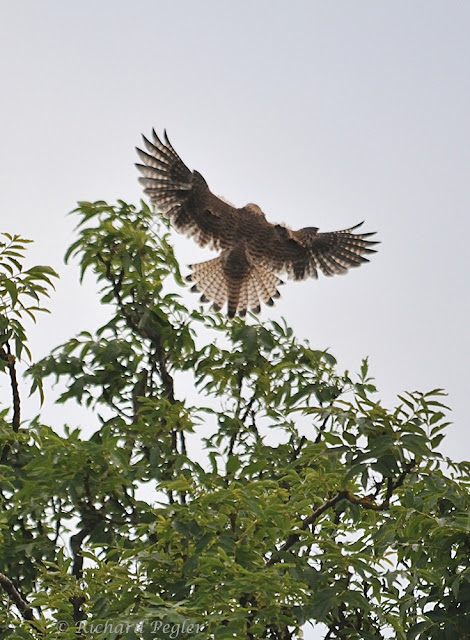 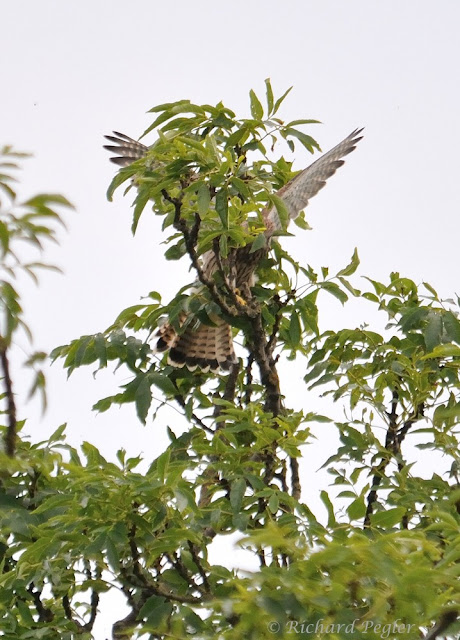 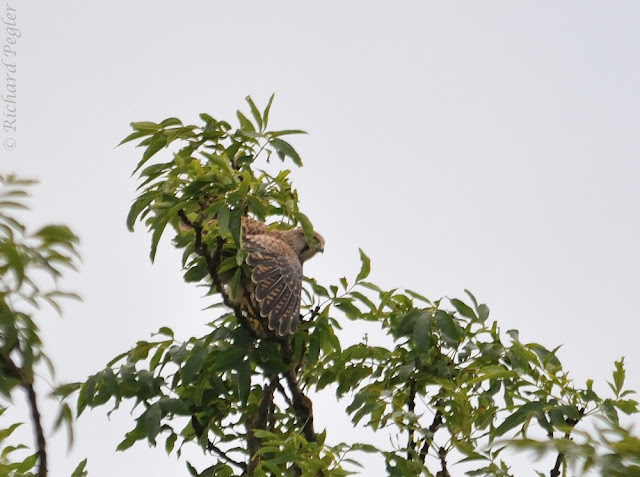 No.11 there were a number of Banded Demoiselle. I think that both male and female of the species look fabulous but, unfortunately, the only female seen was not cooperating with the camera!

Having had such a poor result at my last visit to my LO Site No.17, near Packington, I set myself up for a full morning here. The intended early start didn't happen, and it was 08.30 before I arrived to find one of the adults - out on a post, with its back to me.

I already had in mind the shot I wanted, and quickly set up my hide and sat in it and waited. An hour later and I'd not seen hide nor hair of an owl, but amused myself with a shot of this Rabbit which never realised that I was there.


It was an hour and three quarters before an owl appeared - a juvenile in a place that was totally unexpected. Unfortunately it did nothing other than sit there for a minute before turning round and disappearing back into the roof space.

Nothing was seen for another three quarters of an hour before a bird suddenly flew down to a gap in the barn wall that I was not expecting to be used, as for 51 weeks in a year it is blocked up. This happened to be the one week that it was open! It was immediately followed a split second later by another bird, which stopped on the threshold. Unfortunately it didn't turn round, and so its head stayed in shadow. It was a juvenile bird, and I assume that the leading bird was an adult as I'd been hearing a calling bird at various places round my position.

A couple of minutes later, a third juvenile arrived, but this one did turn round and perform for the camera a little before diving into the barn. If I'd been set up in a different place I could have done better with these shots. I must try and get back before this is blocked up again. 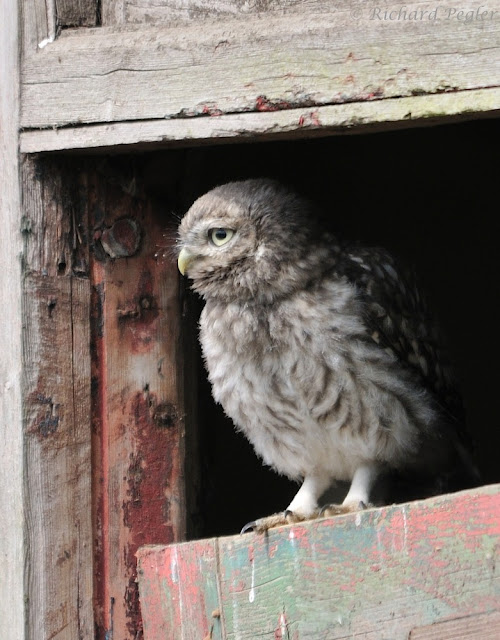 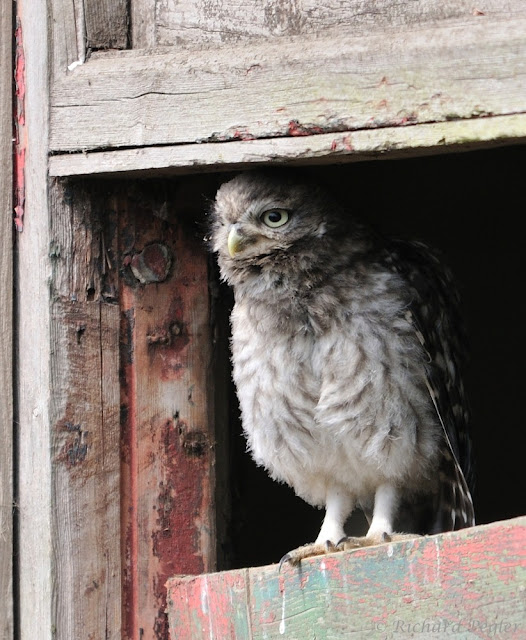 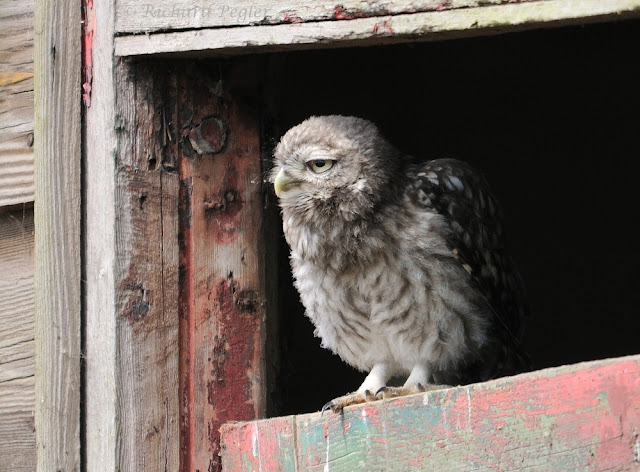 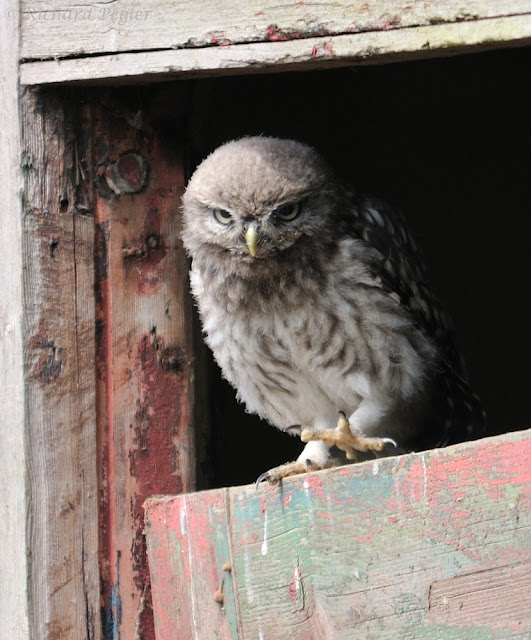 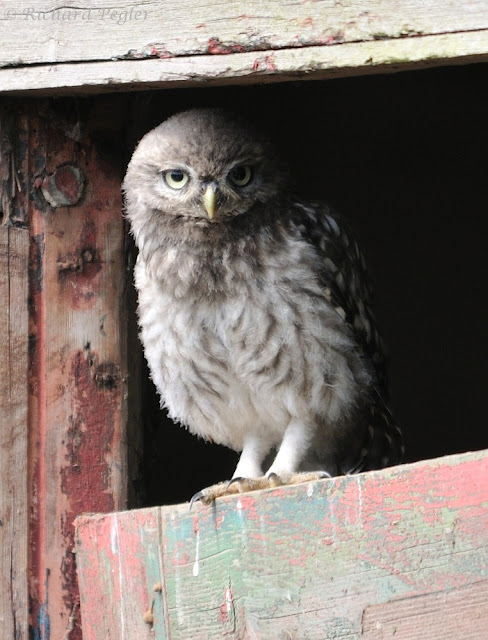 I was expecting another long wait, so welcomed the distraction of a juvenile Pied Wagtail (very pale?) on the barn roof.


However, the wait was not as long as I expected. Just 9 minutes after the last juvenile had dived into the barn, an adult bird emerged from the barn to check me out - this was the shot that I was set up for, but with the light as it would have been a couple of hours earlier!!

The bird soon flew off, and then continued to check me out from various positions, out of sight. At one point, I swear it was on the roof behind my head, not two metres away! The noise was deafening!! It was while this cacophony was going on that I noticed that one of the juveniles was sitting behind a window in the barn. There was all sorts of junk between me and the juvenile, but I did manage a few images, and I am delighted with the atmosphere of the results.

Twenty minutes later the adult bird dived back in through the usually closed aperture that had been so much used earlier.


I hung around for a bit long but decided that, after three and a half hours, it was time to move in case I was unduly disturbing the birds. As I walked past the hole in the barn that I'd been set up for, an adult bird emerged again, and flew over my head! A few minutes later, and it was on a post at the edge of  a nearby paddock - time to go, but a great morning after a slow start!!