I'll try and keep this post somewhat shorter than my last one!

We came back from Scotland on the last day of January, and I was champing at the bit to get out and see if the Short-eared Owls were still at my local site. It was 16.35 before two owls showed, but I still managed to get some images. It looks as if the bird shown in the second image (different to the one in the first image) is my old cross-eyed friend! 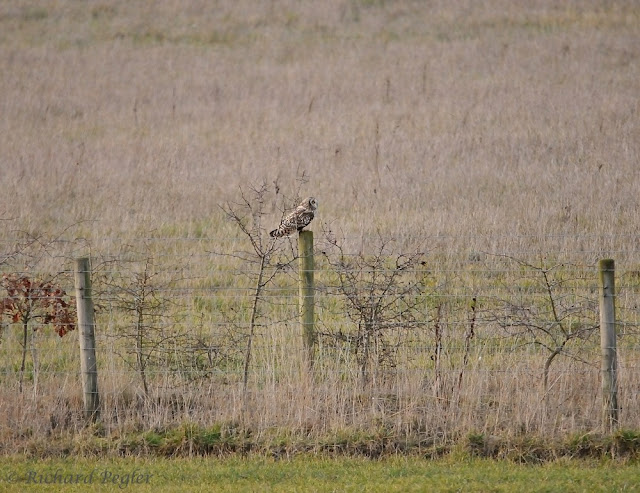 It started getting dark soon after this and I started heading for home. For some reason I seem to have made a habit of grabbing a last minute shot in terrible light, and then coming up with something that I quite like. This day was no exception, with some images back-lit by light reflecting off the lake behind the bird. The dark splot to the left is an island in the lake.

Having been pretty much preoccupied with processing hundreds of images from the Scottish trip, I didn't get out again until this day. I couldn't resist trying to get some images of the owls in the sunshine, with deep snow on the ground. Arriving just after 14.00, two owls were located almost immediately. However, disappointingly, the only shot I managed which showed any amount of snow was a distant one.

The disappointment was partly allayed by some flight images where the underside of the bird was beautifully lit by the light bouncing off the snow below. I've never seen a SEO looking so white underneath!

I managed to get some further shots of one of the owls on a post, and the other in a tree. 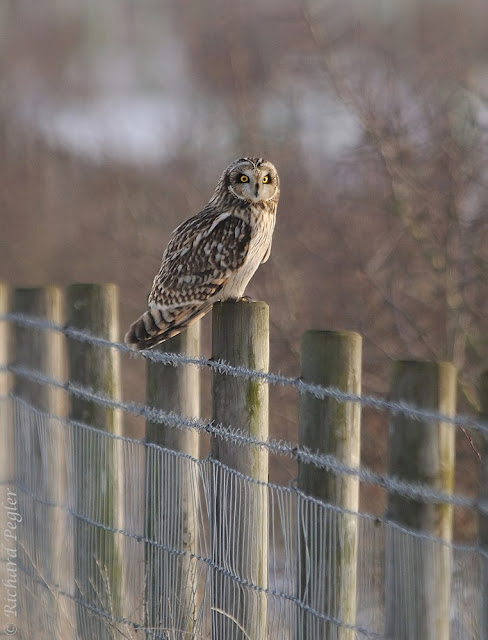 After this, the clouds suddenly started rolling over, it went quite dark, and looked as if it was going to start snowing again, so I beetled off home, not even stopping to take the parting shot. Now I must try and re-connect with the Little Owls - not seen one since 17th January!
Posted by Richard Pegler at 11:35