A few weeks ago, I said to Lindsay that I'd not had a proper sighting of a Kingfisher yet this year,  and it was about time I did something about it. Two days later, on 18th September, my Blogger friend Pete Woodruff published a blog post which featured an inspiring video clip of a Kingfisher. I responded by saying that it was about time I went to try and get some time with this wonderful species. Two days after that, I set off to a place where there was, maybe, an even chance that I'd find one.

Whilst many local birders will know exactly where this location is, it is an unwritten rule for this site that its location is not widely published as it has, at times, become uncomfortably overcrowded. I am happy to abide by this rule.

I arrived at the site to find rather more cars present than I'd hoped for. Nevertheless, I continued with my mission. Calling in at the first location, I found one other person already present. Nothing more exciting than a distant Green Sandpiper was seen and, after a while spent chatting with this person, I took my leave and set off down the trail to the second location.

I arrived at the second location to find five people already there and as I approached I caught a glimpse of a Kingfisher flashing past!

The five people there were a very pleasant bunch and I was soon settled in a place where I could get a reasonable view of the water. At first, I contented myself with photographing the Little Grebes that were there, and a bit closer than is usual for them at this location. It was good to see both adult and well-developed juvenile present. 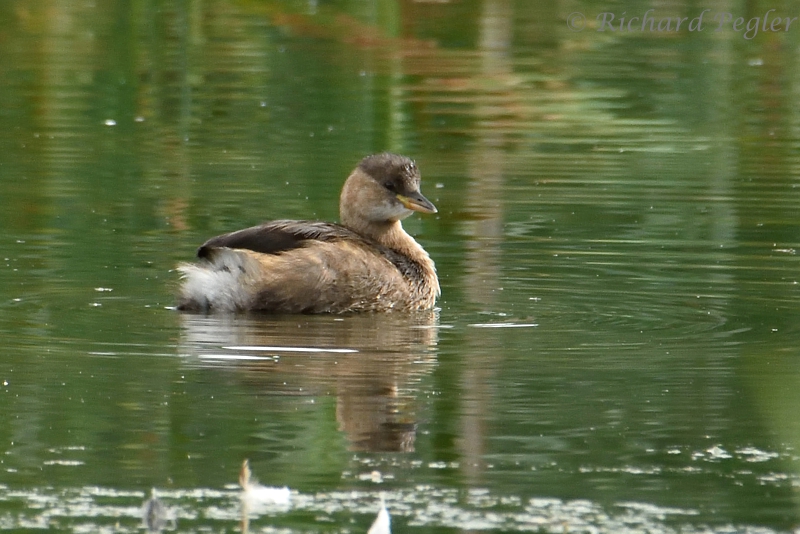 After about forty minutes, Paul (an old aquaintance) brought our attention to a Snipe that had just emerged from the reeds below his position. I managed to get some shots over the shoulders of the two other people in front. I couldn't resist the second image below , which shows the bird looking somewhat dishevelled while having a good scratch. 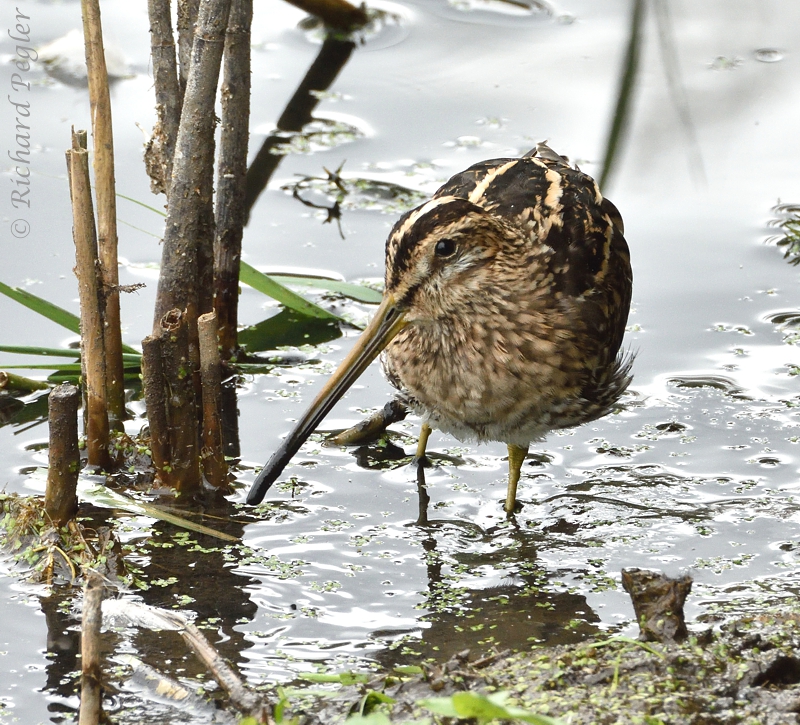 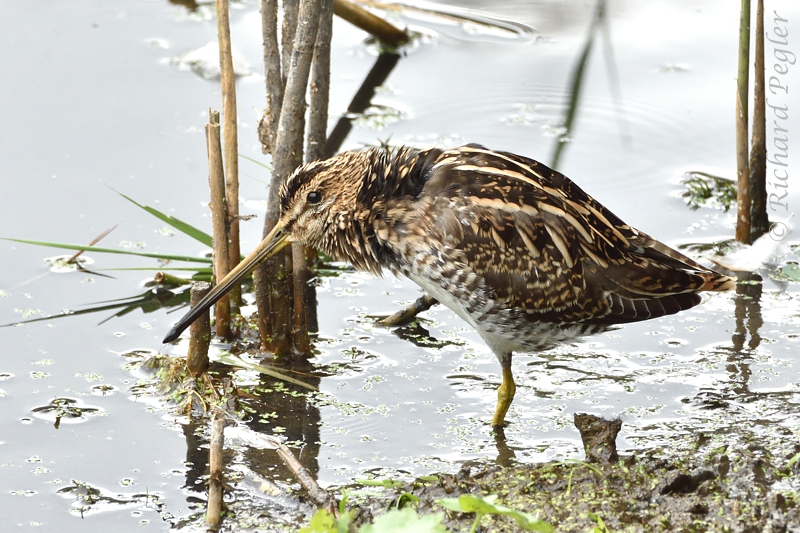 Four of the five people, all of whom had been there for several hours, departed about an hour after I arrived, having had nothing but fleeting glimpses of a Kingfisher as it flashed through before my arrival. This left me with one other person. We were busy chatting about twenty minutes later when a Kingfisher arrived and landed on a stick near us. 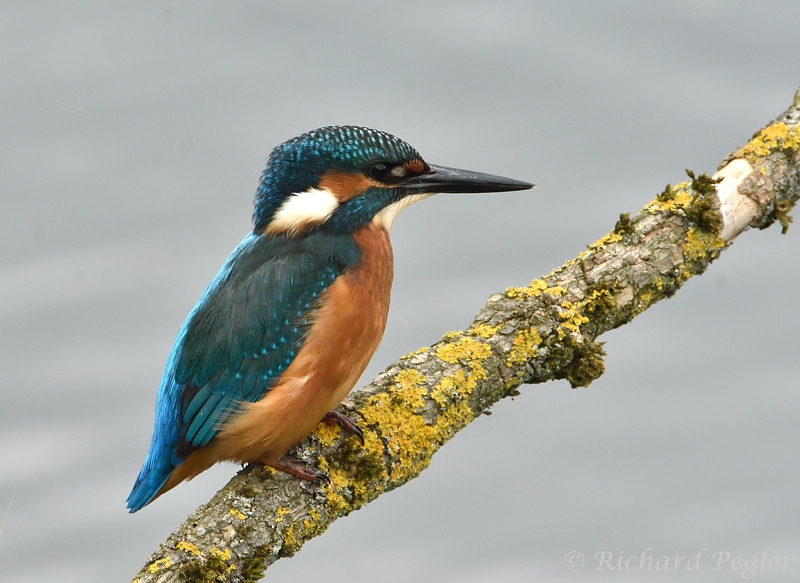 It then did us the favour of moving to a different position.
From here it did a quick plunge, returning to  the same stick with something that I cannot identify.
It then descended onto a rock in the water.
It finally graced us with a visit to the photographic prop that had been placed out in the middle of the water.
The session then came to an end as it departed to the far end of the lake before heading out of sight. It had been with us for three minutes, and it did reappear a couple of times but only zooming through without stopping.

I stayed for another half hour, during which the Snipe reappeared and I took some shots of other birds at a greater distance.

I called back at the first location on my way back to the car, to find that the Kingfisher had also been visiting that location and it arrived almost immediately as I arrived. 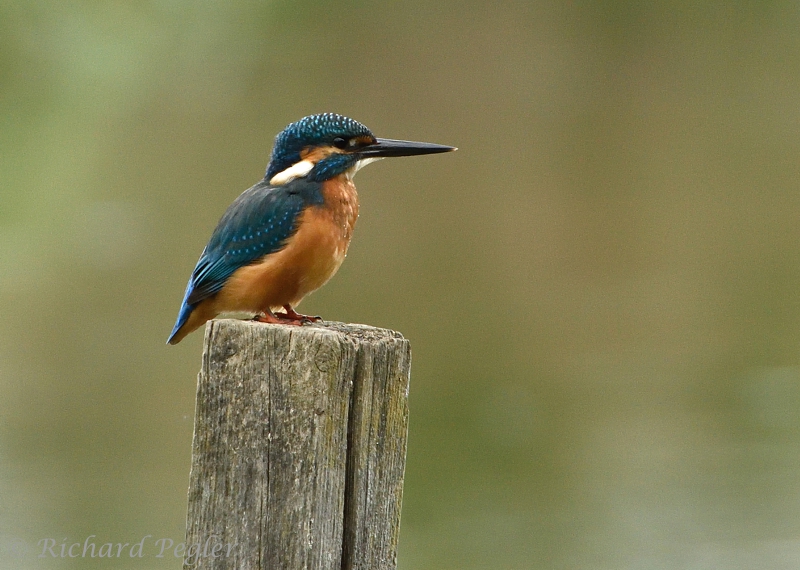 The mission had been accomplished, although I could have wished for better light, so I headed home in an exceedingly happy mood.

I hope you will forgive the plethora of Kingfisher images. I have no idea when, or if, I might get such an opportunity again!

I suspect that my next blog post will be in about a week's time and cover my home-based part of the second half of September. However, I have a week's worth of photos from a visit to the Isles of Scilly to process, so I might get a bit caught up with those!

In the meantime, please take good care of yourselves and Nature. Thank you for your visit - - - Richard